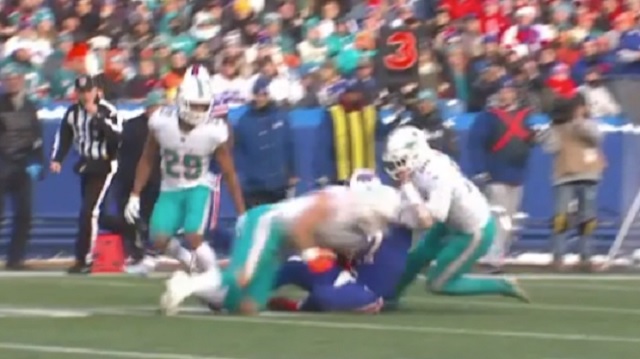 Last season Dolphins linebacker Kiko Alonso delivered one of the dirtiest hits of the regular season when he laid out Ravens QB Joe Flacco with a late hit.

On Sunday afternoon, Alonso delivered another late hit on a QB when he hit a sliding Josh Allen.

Alonso was subsequently ejected from the game and several people online are calling for Kiko to be suspended.

#Dolphins LB Kiko Alonso was just ejected for trying to hit another sliding QB. This time, it was #Bills QB Josh Allen, sparking a fracas.

Kiko Alonso sure is involved in an inordinate amount of hits involving sliding quarterbacks.

Kiko Alonso sure does have a knack for hitting sliding QB in the head.

Can the @NFL suspend Kiko Alonso indefinitely now, he is such a dirty player!!!

At what point do u just suspend kiko Alonso for an entire year? How many times can one person try to end a QBs life with an illegal hit til u just say he’s bad for the game and get him out. pic.twitter.com/SIHlTof7DC

Fucking Kiko Alonso with another cheap shot! Suspend this fucking piece of shit from the league!#MIAvsBUF #GoBills #LetsGoBuffalo