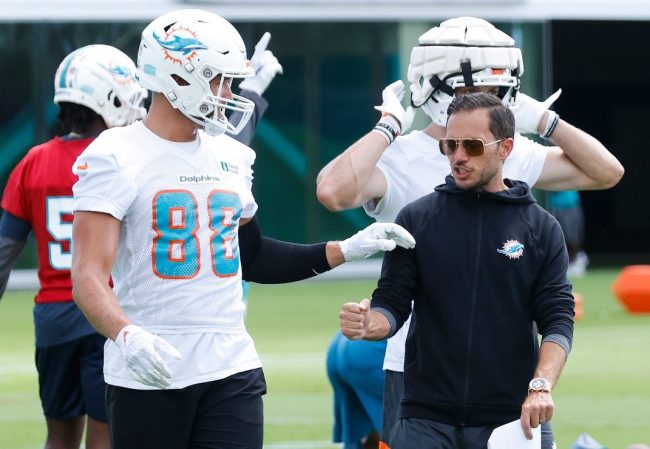 Trade rumors have been heating up around the Miami Dolphins organization after many speculate the team is shopping Mike Gesicki. Nothing has happened as of yet, but some franchises should be interested. Now, Dolphins head coach Mike McDaniel weighs in and it’s not answering any questions.

Dolphins Head Coach Doesn’t Clear Up Anything Regarding Trade Rumors

Doug Kyed was one of the first to report that Miami is looking to trade Mike Gesicki. Since then, many have pondered which teams could be interested in the talented tight end. The front office could be looking for some extra draft compensation after having their first and third-round picks taken away in 2023. If that’s the case, then trading Gesicki makes sense for the Dolphins.

However, Joe Schad shares a comment made by Mike McDaniel, as the Dolphins head coach provides a rather confusing update. Have a read for yourself and see if it makes any sense.

Yeah. That makes perfect sense. This vague answer definitely clears everything up (sorry if you didn’t catch the sarcasm). McDaniel definitely took a roundabout way in answering the Dolphins’ trade rumors questions. Despite that, these rumors should remain relevant for now, especially since we’re still a couple of weeks away from the NFL season as of this posting.

After getting hit with a tampering punishment, Miami must find a way to reel in more draft capital for the 2023 NFL Draft. However, this roster is loaded, so it’s important to maintain what could be a playoff contender as well. Keep an eye on the Dolphins, as these trade rumors could be legitimate. Even though Mike McDaniel delivered a rather confusing update.