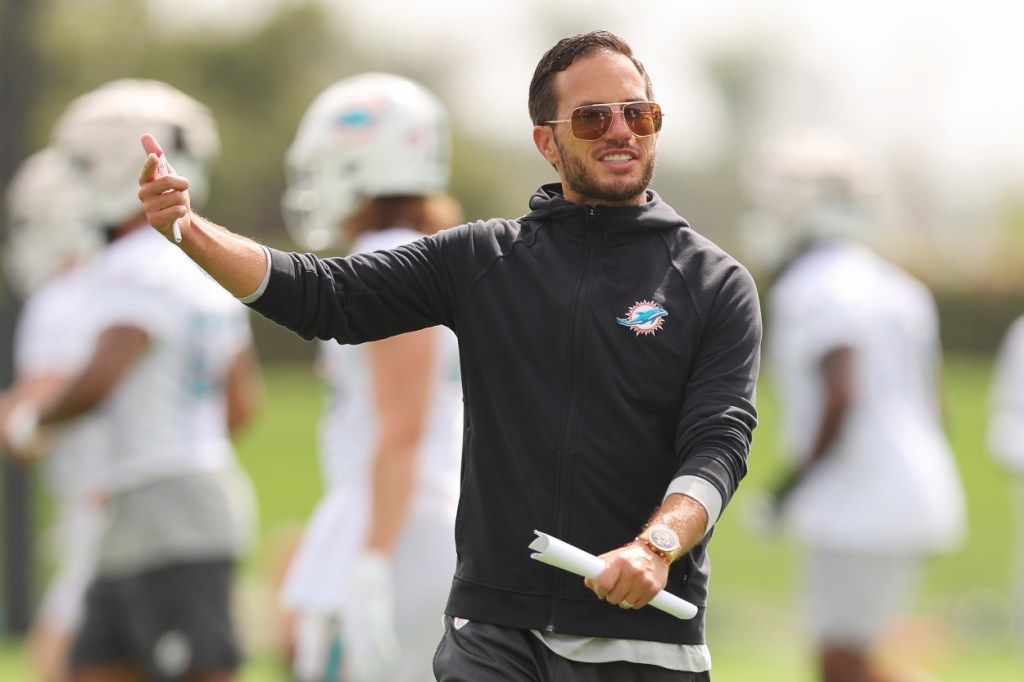 First-year Miami Dolphins head coach Mike McDaniel is one of the youngest coaches in NFL history and one of the most exciting young figures to watch. The Phins will be a pretty exciting team to watch this season with Tua Tagovailoa picking up one of the best wide receivers in the league, Tyreek Hill.

Mike McDaniel has been in an NFL front office since 2005 and he’s no stranger to the scrutiny from the media and fans. Especially in recent days with the Tom Brady entanglements. But the spotlight is now shining brightly on him as the Dolphins’ head coach and it sounds like he’s already growing tired of dealing with the media’s questions.

McDaniel got snippy with reporters on Wednesday after he was asked about whether or not Tua Tagovailoa will start or even play on Saturday in Miami’s preseason game against the Raiders.

Mike McDaniel Is Already Getting Fed Up With The Media

Mike McDaniel not ready to announce of Tua will start or play Saturday.

Mike McDaniel on announcements: "Tomorrow there's a player's birthday. I should announce that. I should announce my wife went to the grocery store, which is exciting because I'm a big snack time guy. Outside of that, oh, I would like to announce I'm very excited for practice."

If this is how Mike McDaniel is reacting to questions about starters it’s certainly entertaining to wonder how he’ll react after the Dolphins lose a few games in a row and the media is grilling him with questions.

A few jokes started rolling in about the head coach’s short fuse before the season even started.

This guy is hilarious https://t.co/N7ISktnDgI

It’s Hunter Long’s birthday on Friday, a few more later in the month. Couldn’t find an 8/18 birthday on the roster. https://t.co/TiFoBs3xYM

Ok look, Matt LaFleur is a freaking awesome coach, but Mike McDaniel seems like he could be my best friend. https://t.co/MDnsULBeve

All things considered, I’d 100% rather have a head coach cracking sarcastic jokes in response to the media’s overbearing questions than a head coach who loses his temper. I think Mike McDaniel will work out well for Miami if they can just figure out how to get things going this season.

And if the head coach develops his talent of making reporters feel foolish for asking certain types of questions that’ll certainly take him far in press conferences. Bill Belichick never gets grilled with questions reporters expect him to give a short/non-answer to. They avoid it entirely. So there’s certainly a strategic advantage to being a bit of a smarta** with reporters.

Tua Tagovailoa would have preferred that nobody knows he got married. https://t.co/oQSULr7ka6