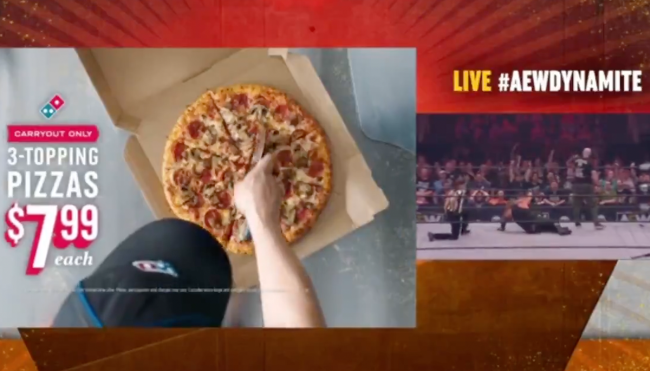 It’s been a couple of years since Vince McMahon found himself dealing with a new competitor in the form of All Elite Wrestling, an upstart company co-founded by the owner of the Jacksonville Jaguars that debuted with a modest stable that now boasts a number of former WWE superstars including Matt Hardy, Jack Swagger, and Chris Jericho.

Mr. McMahon doesn’t seem to be too concerned with the many moves the AEW has made to raise its profile since it held its first pay-per-view match in the spring of 2019 before its weekly show landed with a splash on TNT that fall. However, the brand has done a fantastic job differentiating itself from the behemoth that is the WWE and has boasted some incredibly solid ratings that have drawn the attention of some notable advertisers—including one it may not have for much longer based on what unfolded earlier this week.

On Wednesday’s episode of Dynamite, Jericho faced off against Nick Gage and saw his forehead fall victim to the pizza cutter his opponent pulled out to satisfy the bloodlust of AEW viewers. In what appeared to be a truly incredible moment of corporate synergy, the broadcast was briefly interrupted by an ad for Domino’s that featured an employee using the same implement in a slightly more traditional manner.

WARNING: The following clip contains footage of a guy getting his forehead slashed by a pizza cutter, which you should already know if you read the previous paragraph.

Still losing my mind over Nick Gage with the pizza cutter then DOMINOS WITH THE PIZZA CUTTER?! #AEWDynamite pic.twitter.com/DVzEN7so4S

However, Front Office Sports reports Domino’s wasn’t exactly thrilled with one of the more organic crossover promotions you’ll ever encounter. It told the outlet it’s considering pulling its ads from future broadcasts in the wake of the match, saying, “We share the concerns expressed about this incident and the content of this TV-14 rated program, and are assessing our advertising presence on it going forward.”

I can only hope Little Caesars pounced on the opportunity to run one of its spots whenever an AEW wrestler falls victim to a spear.