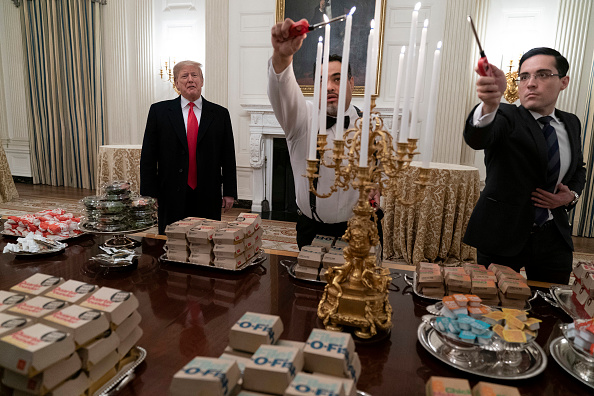 With no cooks working the kitchen in the White House because of the government shutdown President Trump had to get a bit creative about how he was going to feed the 76 Clemson players who came to visit D.C. after winning the National Chammpionship last week.

News: Due to the government shutdown, President Trump is personally paying for the meals that will be provided to the Clemson team during their celebration tonight, CNN has learned. Trump said he's serving "McDonald's, Wendy's and Burger King's with some pizza." WH statement: pic.twitter.com/SAae2dSuMr

The White House is currently operating with a thinned-out staff caused by the government shutdown and inclement weather in DC. Much of the Executive Residence staff, ordinarily responsible for catering this stuff, are either furloughed or at home because of the snow closure.

We now have images of Trump and his staff serving platters of Big Macs and Filets O’Fish at the White House and they are amazing.

Here’s a video I shot of President Trump showing off his 300 hamburgers. pic.twitter.com/P06S6I5w07

Hello, McDonald's? This is the White House. We need 300 Big Macs and Quarter Pounders to go. pic.twitter.com/OeLb8HF6S1

NCAA made billions off me and all I got was CTE and a Big Mac pic.twitter.com/IMg2oaMEFP

This is the greatest photo of all time pic.twitter.com/a3vhqu9mpJ

The silver serving ware under those Big Macs boxes really class them up a bit. WHAT?! Sweet and sour containers in a silver sauce serving dish is luxury at its finest. pic.twitter.com/VoVBKbFPYq

If this isn’t used as an advertisement for a $5 meal deal, I don’t know what your marketing department is doing.