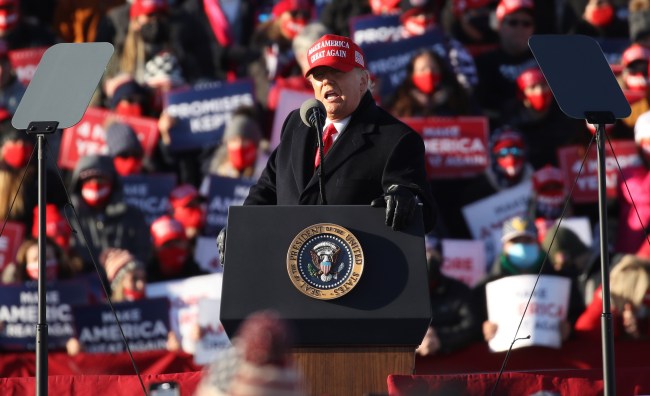 President Trump continued taking shots at the NBA and LeBron James while campaigning in Pennsylvania on Monday.

During a campaign stop on election eve, Trump told his supporters he felt bad for LeBron after the NBA received record-low ratings during the NBA finals.

Following his comments on the NBA, Trump’s supporters could be heard loudly chanting “LeBron James sucks.”

LeBron has been the target of the President for months now. Back in August, LeBron responded to the President’s criticism of the NBA by saying he didn’t think the basketball community cared about “losing his viewership.”

Lakers’ LeBron James on President Trump saying kneeling NBA players are a “disgrace”: “I really don’t think the basketball community are sad about losing his viewership. … November is right around the corner and it’s a big moment for us as Americans.” pic.twitter.com/m8G3KQAWsd

While LeBron has not directly campaigned for Vice President Joe Biden the same way he did for Hillary Clinton back in 2016, he did have Barack Obama on his HBO show “The Shop” last week to urge young people to vote in the upcoming election.