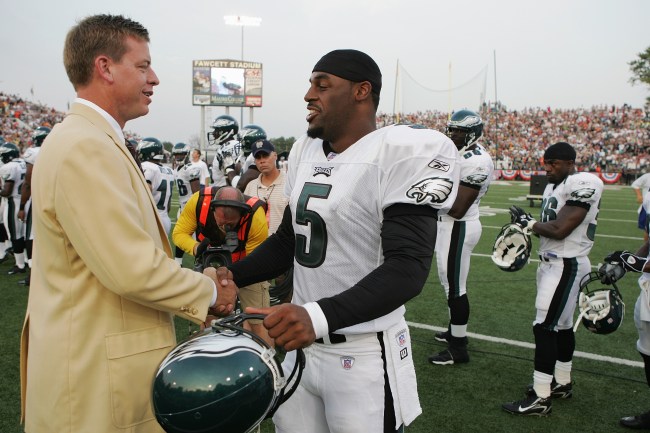 Donovan McNabb is doing whatever he can to campaign for his case to be elected into the Pro Football Hall of Fame — even if that means calling out one of the quarterbacks who’s already enshrined. That’s what the former Philadelphia Eagles signal-caller recently did, when, talking to TMZ Sports, McNabb stated that he has better overall stats than Troy Aikman, which makes him think he should already be in Canton.

The frustration from Donovan McNabb is understood, as he’s been passed over three times by the Hall of Fame selection committee, and he has yet to even make it beyond the initial nominee stage (the 100 or so nominees each year are narrowed down to 25 semifinalists, then to 15 finalists), meaning he’s probably not going to get a bust in Canton. But, hey, in his eyes, he should. Here’s what McNabb had to say when chatting with TMZ Sports about the topic.

“My numbers are better than Troy Aikman.

“I’m not hesitating on that. I am a Hall of Famer,” McNabb says … “My numbers speak for themselves.”

“When they look at my numbers, yeah, but then they always want to add other stuff into it. ‘Was he an All-Pro? Was he this? How many Super Bowl opportunities?’ But, people don’t realize how hard it is to get to the NFC Championship and to get there five times, and then make it to a Super Bowl? It’s tough.”

Now, personal bias aside, Donovan McNabb does make a strong case for being in the Pro Football Hall of Fame. Not only did he go to five-straight NFC Championship Games, which included one Super Bowl appearance, but he does have better career stats than Troy Aikman — McNabb finished with 37,276 passing yards, 234 passing TDs and 117 career interceptions to Aikman’s 32,942 passing yards, 165 passing TDs and 141 career picks. Problem is, Aikman has three Super Bowl rings to McNabb’s zero, which kind of cancels out the whole regular season numbers argument. Plus, the 2018 list of nominees was stacked, and, moving forward, the names of worthy candidates will only increase.

Considering two of Donovan McNabb’s former Eagles teammates, Brian Dawkins and Terrell Owens, have both been elected in recent years, he did say that it maybe “helps the cause going forward.” Unfortunately for McNabb, not everyone can be a Hall of Famer, and, although is stats are impressive and he was a superstar during his playing days, without a championship ring on his finger, he may not be worthy of getting into Canton.