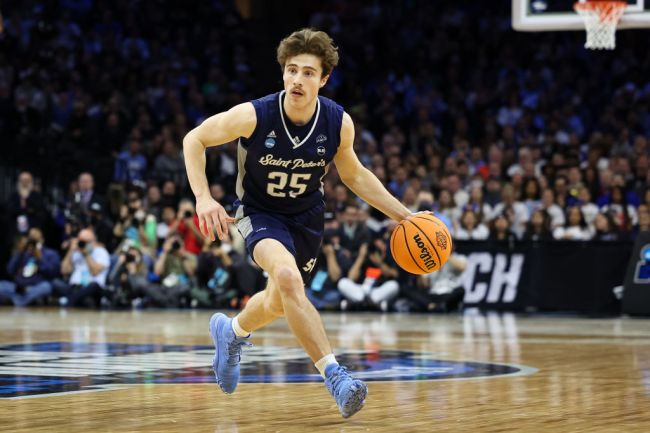 The exodus from Saint Peter’s has officially begun. After former head coach Shaheen Holloway used the team’s Cinderella run in the NCAA Tournament to land the job at his alma mater, Seton Hall, some of the stars of the Peacocks decided to enter the transfer portal.

Now we know where the first of those stars will be transferring. According to basketball insider Adam Zagoria, Doug Edert has decided to transfer to Bryant.

Doug Edert has committed to @BryantHoops , per source

Transferring to Bryant should give Edert the opportunity to truly show off his offensive game next season. At Saint Peter’s he was playing in an offense that ranked outside of the top 250 in the country in scoring and Edert managed to average 9.5 points per game for the Peacocks.

Bryant fell all the way on the other end of the spectrum. This past season, they were top 30 in the nation in scoring. Bryant also produced the nation’s top scorer this season with Peter Kiss averaging 25.2 points per game. They also had Charles Pride averaging 17.7 per game, making him and Kiss one of the nation’s highest scoring duos.

Kiss has declared for the draft since the end of the season, which would open a spot for Edert to replace him alongside Pride as long as Kiss doesn’t opt to return later. If Kiss returns, the three guards together would form a potent trio for the defending NEC champions.

Bryant wasn’t able to make it past the First Four this season, but maybe Edert is the piece they need for a Cinderella run of their own.