Dr. Fauci Says ‘Virus Will Make The Decision’ Regarding The Return Of Sports, Explains NFL Games Played In Half-Full Stadiums Is ‘Feasible’ 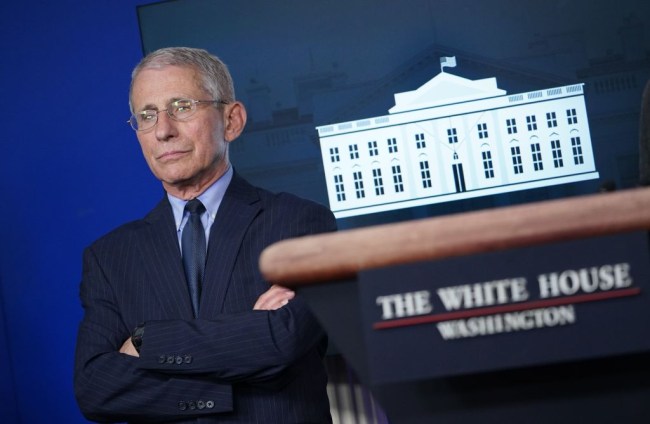 Something that has been consistent throughout these crazy times we find ourselves in is that when Dr. Anthony Fauci speaks it’s time to listen. Dr. Fauci, the director of the National Institute of Allergy and Infectious Diseases, has been somewhat of a shepherd throughout the pandemic.

Two weeks ago Dr. Fauci stated that we may have to go without certain sports this year due to the lack of testing, which wasn’t the greatest news to hear. On Monday, however, he offered up an optimistic viewpoint, at least when it comes to the start of the NFL season.

Speaking with Pro Football Talk’s Peter King, Dr. Fauci did make it abundantly clear that “the virus will make the decision for us” when it comes to the sports world getting the green light to resume. Most already assumed that to be the case, but it still leaves a giant question mark in regards to the NFL and whether or not the 2020 season will start on time in mid-September.

If the availability of testing does increase over the coming months as expected, then according to Dr. Fauci, the NFL season could start on time albeit in at the very most a half-full stadium

“I think it’s feasible that negative testing players could play to an empty stadium,” Fauci said. “Is it guaranteed? No way . . . There will be virus out there and you will know your players are negative at the time they step onto the field. You’re not endangering . . . Also, if the virus is so low that even in the general community the risk is low, then I could see filling a third of the stadium or half the stadium so people could be six feet apart. I mean, that’s something that is again feasible depending on the level of infection.”

Dr. Fauci also made it clear that football has one advantage on its side at the moment and that’s time. Sports that hit pause in the middle of their season have a tougher battle to fight when it comes to starting back up again given all the moving pieces at play.

“I keep getting back to that: It’s going to depend. Like, right now, if you fast forward, and it is now September. The season starts. I say you can’t have a season—it’s impossible. There’s too much infection out there. It doesn’t matter what you do. But I would hope that by the time you get to September it’s not gonna be the way it is right now.”

The 2020 NFL season is scheduled to kick off on Sept. 10 with the Texans traveling to Kansas City to take on the Chiefs.