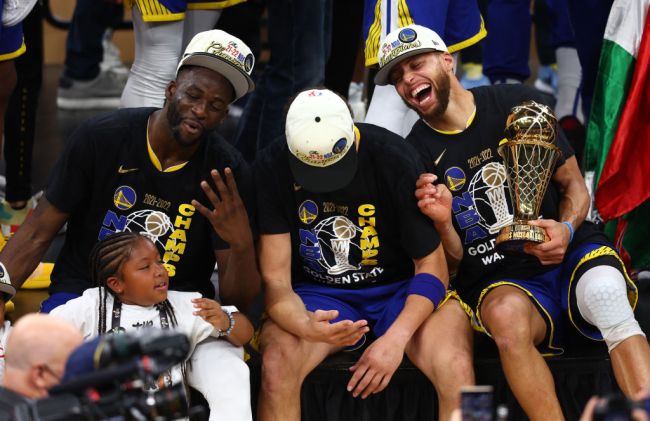 After winning the 4th NBA title of his career, Draymond Green decided to take some time off from celebrating to address a comment made by Skip Bayless before last night’s Game 6.

On Wednesday, Draymond spoke about the different challenges the Warriors faced when they met LeBron in the Finals compared to this year’s matchup against the Celtics.

Draymond Green was asked the mental challenge of facing Celtics vs. LeBron James:

"It doesn't compare. He is arguably the smartest guy to set foot on a basketball court. To say that it compares to that, it's disrespectful to LeBron & it's a lie to you."pic.twitter.com/jXCyULdW29

Yesterday, Skip Bayless decided he should try to interpret the true meaning of this comment from Draymond.

“Draymond is basically saying the Celtics are not as good as LeBron’s Cavaliers were. LeBron in his prime in 2015 with a healthy Kyrie and Kevin Love would’ve swept these Celtics.”

This morning, Draymond responded to Bayless’ comment, rejecting the idea that he was saying the Celtics were not as good as those Cavaliers teams.

Yours Truly,
The New Media https://t.co/FDqWEW7T7B

Really, the most egregious part of Skip’s comment is the idea that you can assume those Cavs teams would sweep anybody after round 2 of the playoffs. They dropped a game against a much less talented Celtics squad in 2017 after they had already lost Isaiah Thomas for the series. They also needed 6 games to get past the Raptors the year before.

At this point, it really wouldn’t even matter if Draymond was saying the Cavs were better than this Celtics squad because, at the end of the day, the Warriors have now beaten both of them.