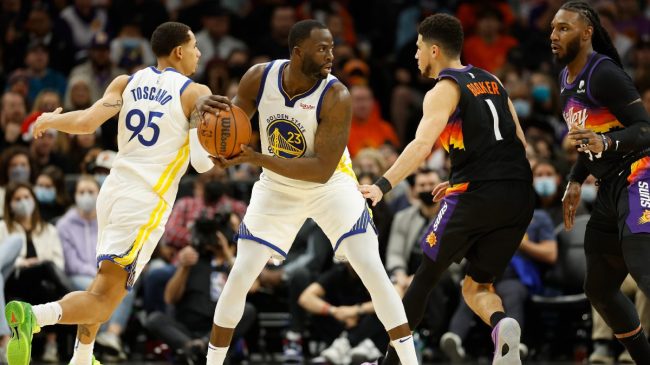 The Suns and Warriors faced off Wednesday night in an important division matchup.

Both teams were looking to stay atop the Western Conference playoff standings. It was the Suns that would wind up winning the close matchup, keeping the Warriors from gaining any ground.

With just a handful of games remaining, the Suns have now clinched the NBA’s top spot while Golden State is hoping to move into a three-seed by regular season’s end.

While the back-and-forth contest provided viewers with entertainment on the floor, it was a postgame altercation that had fans talking.

Jae Crowder and Draymond Green got into a heated discussion when the final buzzer sounded, with each player trading insults.

"You choked twice!"
"If you wanna go there, we can go there. You from Buckhead. You from a nice neighborhood. You not like that!" pic.twitter.com/2L20OfmqGv

Green was doing the majority of the talking, which is expected with the Suns being the night’s victors. He starts jabbing at Crowder’s past playoff history, saying, “You choked twice,” referring to his 0-2 record in the NBA Finals.

The jawing continues with Green and Crowder squaring up at midcourt. Green continues to egg Crowder on.

“If you wanna go there, we can go there. You from Buckhead. You from a nice neighborhood. You not like that.”

Crowder didn’t want to go there. Instead, he headed to the locker room with another win.

Green has always been one to speak his mind. He did so earlier this year by calling Lakers’ fans “brats,” so this wasn’t necessarily surprising.

The two teams don’t meet again in the regular season, but this would make for prime viewing entertainment should they square off in the playoffs.