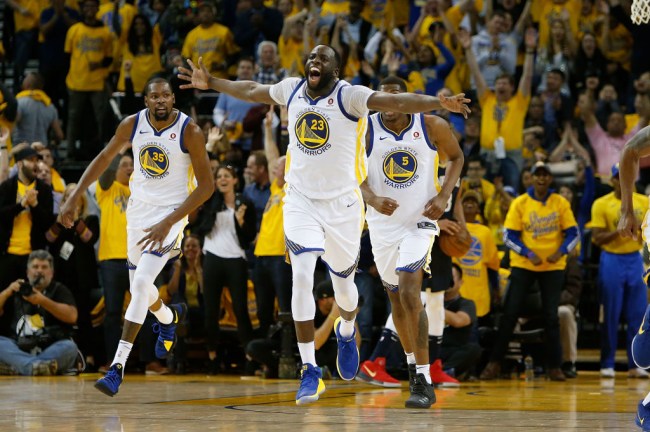 Back in the 2016 NBA finals, LeBron James and Draymond Green nearly got into a fight when Draymond told Bron something innappropriate on the court. ]
Via The Undefeated

Draymond said something that I don’t agree with. I’m all cool with the competition; I’m all fine with that, but some of the words that came out of his mouth were a little bit overboard. Being a guy with pride, a guy with three kids and a family, things of that nature, just some things go overboard, and that’s where he took it.
According to sources, Green looked James dead in the face and called him a “b—-.”

One NBA player in earshot of the trash-talk told The Undefeated that James responded by saying that he was the father of three kids and a man.

Green responded back, according to the player, by saying: “You’re still a b—-.”

Fast forward to the 2018 NBA finals and it appears the Draymond hasn’t learned his lesson.

Watch as Draymond mouths “He’s a fucking pussy” after he felt LeBron was being overly dramatic after a foul.

LeBron gets hit in the face and acts like he died, Draymond swears he didn't foul him LOL pic.twitter.com/xhRSUvojka

It’s only game 1 but it looks like the rivalry between the Cavs and the Warriors is back on. Hopefully the Cavs can keep it interesting.