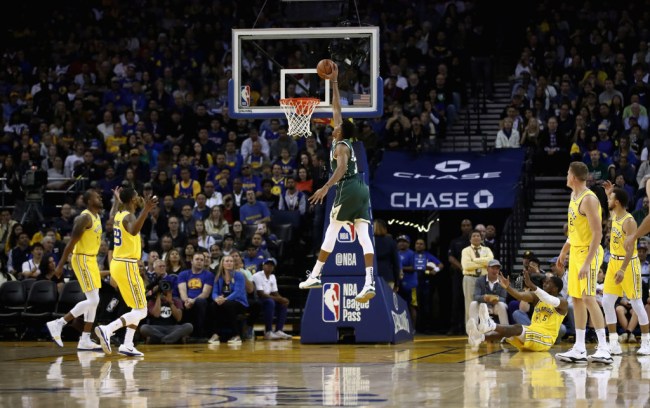 The Warriors were sentenced to guard Giannis Antetokounmpo without the divine defensive abilities of Draymond Green, out with a sprained toe (an injury that is incredibly soft-sounding but undoubtedly painful and debilitating). This didn’t work out too well, as the surging Bucks beat up on the Warriors on their home court, 134-111, to advance to 9-2. The Warriors’ eight game winning streak was broken at the hands of The Greek Freak, who finished with 24 points and nine rebounds in just 26 minutes.

The play of the game occurred in the second quarter when Giannis out-muscled a Warriors defender en route to a thunderous, Stretch Armstrong-esque dunk. Check it out below, and wait for Draymond Green’s reaction at the end.

Draymond was all of us after this Giannis dunk …#FearTheDeer

As a sidenote, the dunk produced an awesome photo, of all five Warrior defenders standing and watching The Greek Freak hammer one down, two with their palms to the sky.

Back to Draymond. His reaction became a viral meme and produced some top-quality reactions.

@NBAonTNT Draymond Green after Giannis dunked on his guy pic.twitter.com/BVU0oU1CWM

Draymond Green looking like his teacher is explaining something that he doesn’t understand pic.twitter.com/uNv5YO8i0N

Who wins in a staring contest between Draymond and Shaq? 😂 pic.twitter.com/iwPNYukf8q

The Fugitive playing on TNT for the third time this week: pic.twitter.com/oYCAoy0anX

Reminds me of something 🤔 pic.twitter.com/E9LlTQl5uC

Good looks on the Twitter user who reminded us that this is actually just Draymond’s resting face.

He’d make the same face watching my niece’s tee ball game. And she hasn’t even dribbled one back to the pitcher yet.
[h/t For The Win]