Dre Greenlaw Pulls Ultimate Power Move, Gets Tom Brady To Sign A Ball He Intercepted In A Blowout Win 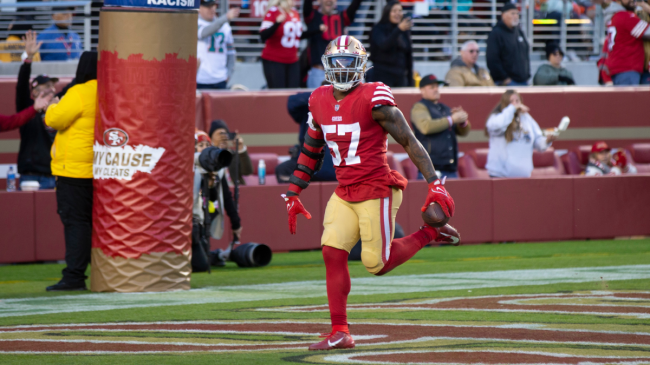 The San Francisco 49ers had a coming out party on Sunday in a blowout win over the Bucs. The team nearly handed Tom Brady the most lopsided defeat of his career, winning 35-7.

Surprisingly, Brady was outmatched by rookie passer Brock Purdy, who led the Niners offense following an injury to Jimmy Garoppolo last week. Purdy showed out in his first ever start, tossing a pair of touchdown passes.

But the offense wasn’t the only side of the ball playing at a high level. The defense picked off Tom Brady twice while holding the Bucs out of the endzone until late in the third quarter. One of those interceptions was made by linebacker Dre Greenlaw, who athletically tipped a pass up to himself before coming down with the turnover.

After the game, Greenlaw pulled the ultimate power move by asking the player he picked off to autograph the ball.

Dre Greenlaw asked Tom Brady to sign his interception ball after the blowout.

Brady was a good sport about the request, happily handing over the signature for the excited young defender. Many were quick to comment on the exchange via social media. Here’s what NFL fans had to say.

One person wrote, “I have respect for both sides doing this.” It was definitely a cool thing to see. This person commented, “Showing some sportsmanship, especially after a beat down like that.”

The pick was Greenlaw’s first of the season and third of his career. This one might’ve been his most impressive coming against the NFL’s greatest quarterback of all time. The interception helped San Francisco move to 9-4 on the season as they look to get back to the playoffs this year.