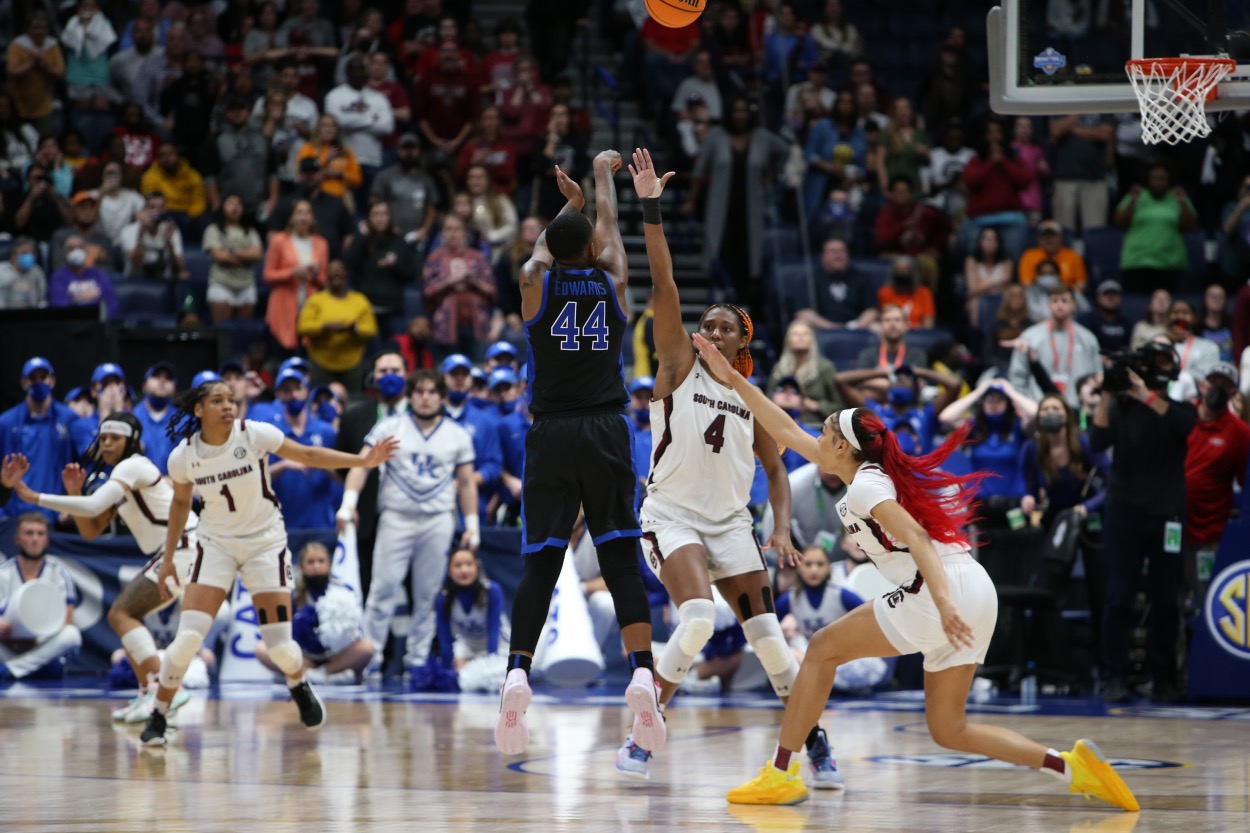 Former Kentucky Wildcat Dre’Una Edwards became a star when she hit the game-winning shot against South Carolina for the Wildcats’ first SEC Championship in 40 years.

Dre’Una Edwards spent her freshman year at Utah before transferring to play for the University of Kentucky Wildcats for two seasons. She averaged 16.8 points/game in the 2021/22 season en route to Kentucky’s first SEC Championship in 40 years.

She then made the decision to transfer and play for the Baylor Bears but has not been able to see any time on the court yet. Dre’Una Edwards recently took to Instagram to shed some light on her situation. She claims that she would be eligible to play but the Kentucky Wildcats are holding her college basketball eligibility hostage, a claim that is disputed by UK.

“I know there have been a lot of questions about my eligibility and why I’m not playing, and I want to give an explanation why.”

“First off, I left Kentucky because I personally decided that I needed a new start. I gave all that I had to Kentucky and wore the uniform with pride. But I wanted a change because I knew a change would be great for me.”

“Entering the portal, I knew that I would not be eligible right away because this is my second transfer. The NCAA has other rules in place that could help me see the floor this year with Baylor if I met the requirements and Kentucky would allow me to play.”

“My first requirement was to make sure I was eligible academically by making sure I am continuing progress towards my degree. I didn’t qualify as a grad transfer, but I have been working extremely hard in the classroom and I was able to rally 33 credit hours in the last six months, ending the fall semester with a 3.6 GPA and a spot on the Big 12 All-Academic Team.”

“While doing this, I also managed to branch out into student life at Baylor, and more specifically, Greek life. I joined SGRHO sorority because I wanted to be more involved in the community outside of basketball. Our motto is “Greater Service, Greater Progress” and that means a lot to me.”

“The next and final step is for Kentucky and head women’s basketball coach Kyra Elzy to sign off on a final waiver. I was hopeful Kentucky would sign off to let me compete this season, as they have told me before that they hope nothing but the best for me. But instead, they will not sign the waiver.”

“With that being said, this is where I stand now in hopes that they change their mind.”

After Dre’Una Edwards posted this to Instagram the hashtag #FreeDree immediately picked up steam. People are using the hashtag in support of the Baylor Bears women’s basketball star. Meanwhile, Kentucky is countering her claims.

A recent update from M.A. Voepel on ESPN claims that Kentucky is denying the existence of a ‘waiver’. The Wildcats are saying what Dre’Una Edwards is referring to as a ‘waiver’ isn’t that at all:

Kentucky countered that what the school was asked to sign was not a waiver but an “NCAA No Participation Opportunity form,” certifying that Edwards would not have had the opportunity to play if she stayed at Kentucky, which she attended the previous three years. Kentucky says it would have been false to sign the form, and that Edwards was informed of that before she transferred. (via ESPN)

Even if Kentucky signed the ‘NCAA No Participation Opportunity Form’ for Dre’Una Edwards she would still need the NCAA to make a decision on her eligibility. This is because this is her second time transferring.

The hashtag #FreeDree has been picking up steam since she posted to Instagram and Edwards’ post has been shared by other top NCAA players like Baylor’s Jaden Owens.

The report on ESPN claims that Kentucky’s “compliance staff met with Edwards in March to give her a detailed outline of what she needed to do in order to be eligible this year if she opted to transfer.”

It claims that Kentucky then informed every school inquiring about Dre’Una that she would not be eligible to play in the 2022-23 season if she didn’t graduate. Kentucky coach Kyra Elzy released a statement shedding further light on their side of the story.

UK coach Kyra Elzy said “we were asked by Baylor to sign an NCAA No Participation Opportunity form, certifying that Dre’Una Edwards would not have had an opportunity to participate if she had stayed at Kentucky.”

Elzy’s statement further said “that would not have been correct; Dre’Una would have had the opportunity to participate if she had stayed. Dre’Una transferred with the understanding that she would have to sit out unless she graduated, which she did not do.”

Nicki Collen added “she needs a waiver to play from Kentucky. She met her Progress Towards Degree requirements by taking all the credits she took here. So she checked off the academic piece of this. But, you know, there are no guarantees.”

From the outside looking in, there appears to have been a breakdown in communication at some point. Dre’Una Edwards appears to believe a ‘waiver’ would have made her eligible to play while Kentucky has made it clear that such a waiver does not exist.