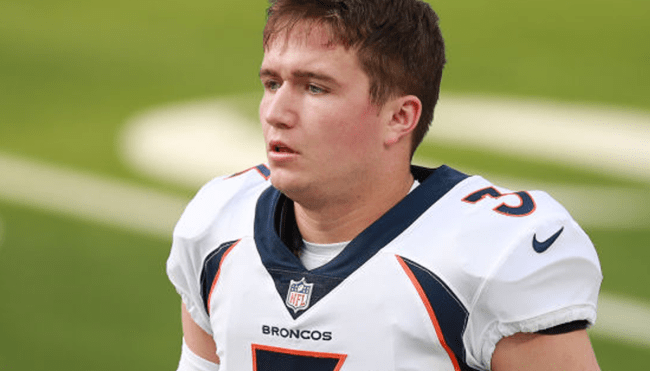 Much like Jaws was responsible for making countless people think twice before going for a dip in the ocean, I’d wager anyone who’s seen Final Destination 2 is subconsciously haunted by the thought of something unexpectedly hurling through their windshield whenever they’re on the highway.

I know I’m far from the only person who changes lanes before slamming down the gas pedal whenever I find myself behind a truck hauling a load of logs, but unfortunately, there’s no shortage of objects capable of giving your windshield the Kool-Aid Man Treatment.

That’s a lesson Denver Broncos quarterback Drew Lock recently learned the hard way, as KDVR reports he was driving down Interstate 70 in Kansas only to have his trip rudely interrupted when his windshield was shattered by a lug nut that became wedged in the glass. The outlet says the freak accident stemmed from a car traveling the opposite direction that lost a tire, which jumped over the median before the dislodged lug nut struck Lock’s car.

Safe travels the rest of your way across Kansas @DrewLock23 👍

Crazy having a (lug-nut) fly across the median striking your windshield and nearly go through it!

Glad your #seatbelt was fastened. 👍

Have a safe season now and into the future. #ServiceCourtesyProtection 🇺🇸 pic.twitter.com/DXDLon2l0Y

You never know who you can help as a @kshighwaypatrol Trooper.

One of the responding officers recounted his interaction with Lock after arriving at the scene and suggested his athletic background played a role in making sure he—nor anyone else—was hurt.

.@TrooperBenKHP says he didn't initially realize it was @DrewLock23 while responding to reports of a lug-nut through a windshield today.

He says the two shared a laugh once he realized who he was dealing with. @KDVR https://t.co/hfCv1PRFf9 pic.twitter.com/KmVflbBUqN

.@TrooperBenKHP says Lock's athletic ability may have helped him avoid a serious injury. He says Lock was able to avoid a bouncing tire before the lug-nut was intercepted by his windshield. @KDVR pic.twitter.com/RVOC7bhJtM