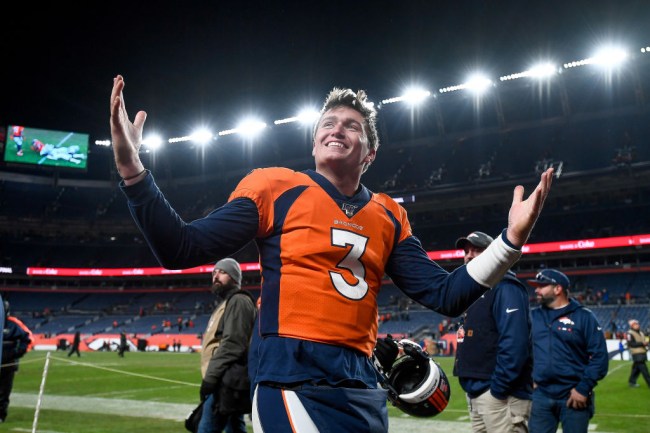 Broncos rookie quarterback Drew Lock has been impressive since taking over as the team’s starter on Dec. 1 against the Chargers. He went 4-1 in his five games this season and has given Broncos fans reasons to be optimistic heading into next season.

We all know the guy is talented between the white lines, but we need to talk about his swagger off the field too which was on full display against the Raiders on Sunday.

Young Jeezy’s ‘Put On’ started playing as the second half got underway in Denver and Lock was caught rapping the song word-for-word. He was feelin’ it, to say the least.

Pretty sure it’s impossible for anyone to watch that video and not sing along while also bobbing their head side to side. ‘That’s right I work for NASA’ always, and I mean always, gets the people going.

There’s something about athletes rapping along to songs on the sideline that is always insanely entertaining and this instance is no exception.

Lock had plenty to be fired up about. Denver built up a 16-3 lead and was able to hang on for a 16-15 win which spoiled the Raiders’ playoff chances. The rookie out of Missouri finished the game with 177 yards through the air and one touchdown.

We won’t really remember the game for what he did on the field, instead, this one will go down as the game Lock showed us all that he can rap his ass off to some Jeezy.