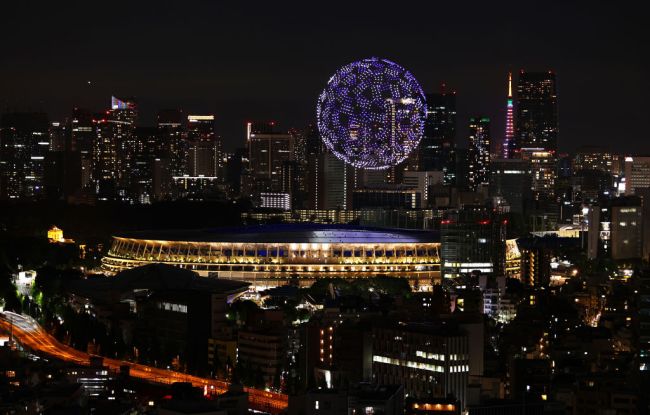 The 2020 Tokyo Olympics are officially underway in 2021! It has been an arduous process to get to this point, but the opening ceremonies are complete.

While there was a somber nod to the COVID-19 pandemic, with one athlete working out on a treadmill in the middle of the stadium, it was an otherwise uplifting event. Fireworks rang out across the night sky, the parade of athletes marked a resounding message of hope and the Japanese capital did a solid job.

The highlight of the event came with an incredible drone show.

Tokyo, known well for its advancements in technology, lit up 1,824 drones above the Olympic Stadium.

PyeongChang used a similar display at the 2018 games, but Japan one-upped South Korea. At first, the drones created crazy pictograms.

The drones were also doing the #pictograms #TokyoOlympics pic.twitter.com/4bzAeYQ1AA

And then appeared the Tokyo 2020 logo.

Shortly thereafter, the logo began to dissipate and transformed into a globe. A side view of the transition is mesmerizing.

The resulting display was remarkable and sat just atop the stadium roof.

As the globe rotated, it made for a phenomenal display.

1,824 drones light up the sky above the Olympic Stadium as the #Tokyo2020 emblem seamlessly becomes a revolving globe 🤯😍🌏pic.twitter.com/x5ti4U6wv8

Videos and images from around Japan’s capital city depict the drone globe from a distance. It may be even cooler from afar.

Drone light show in the sky.
Theme of #olympic opening ceremony is “United by emotion” pic.twitter.com/a9VXldQpyv

Even though the fans were limited to select VIPs, performers were at a minimum and Olympic teams had a capacity on the number of athletes who could march in the parade, the Opening Ceremonies were impressive and the drone show was at the forefront.

South Korea set the bar high with its technology and Japan raised the ball. Will it be topped in coming years?