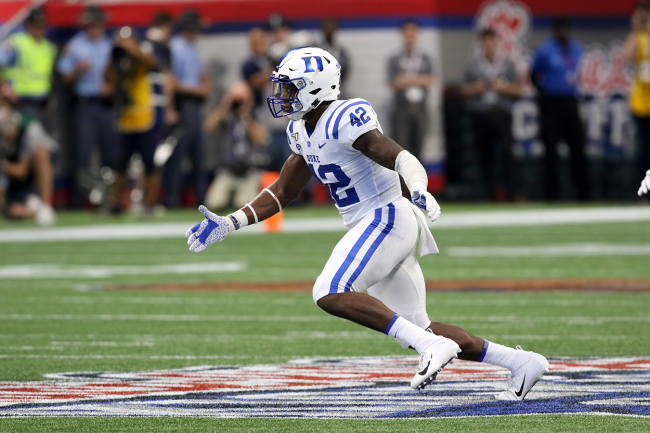 Duke linebacker Shaka Heyward is a very large, well-built man. The redshirt senior stands 6-foot-3, 240 pounds and knows a thing or two about how to lay the lumber.

Heyward has started in all 36 games over the last three years and was named the team’s top linebacker in 2020 and 2021. He was also an All-ACC selection last fall and is on the Chuck Bednarik Award preseason watchlist, presented to the defensive player of the year in college football.

It’s easy to see why. Heyward is a force to be reckoned with.

While it could probably go unsaid, taking a hit from Heyward would not feel good. In fact, some would say that it would feel bad…

… especially if you are not wearing a helmet and shoulder pads. Just ask Brent Greenberg.

Greenberg, the creative director for Duke Football, learned the hard way. He got rocked at practice earlier this week.

During what quickly became a chaotic and painful play, the Blue Devils pass-catcher could not hold onto the throw and bobbled it up into the air. Heyward, being the ball-hawk that he is, came flying in at full speed to try and make the interception.

He could not, and while laying out to do so, his momentum sent him full-force into Greenberg, who was standing innocently on the sideline. It wasn’t just a little bump, it was a full-blown slobberknocker.

While he almost certainly woke up a little bit sore, Greenberg was able to save the camera. Take a look:

Fortunately for Greenberg, he had two lineman come over to help him up because Heyward was up outta there in a hurry.