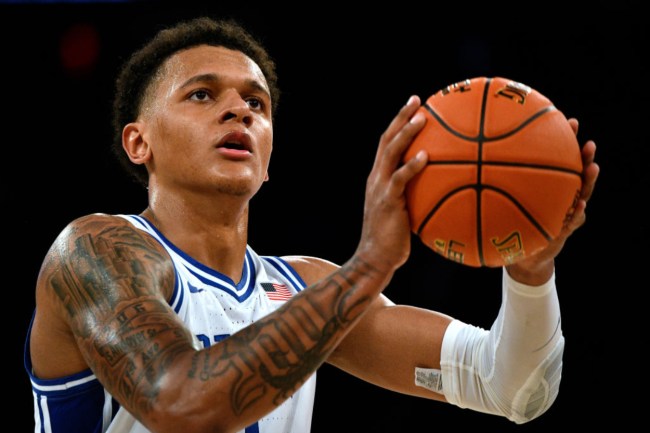 We’ve all been watching a basketball game on TV and seen a player step to the free-throw line with a ridiculous amount of sweat dripping from their face. Some guys step to the line and it looks like they just got out of the shower, and apparently, Duke freshman Paolo Banchero is one of those dudes.

Duke lost its first game of the season on Tuesday night by the count of 71-66 at Ohio State. During the game, ESPN’s Holly Rowe gave a quick report about just how much Banchero sweats during games.

Rowe explained that Banchero is “a heavy sweater” and that he actually loses seven pounds per game. To help battle against cramps, Duke has him drink special “oxygenated fluid” throughout games.

Sure, sweating so much you lose seven pounds during a 40-minute basketball game seems like a lot, but basketball players losing a few pounds per game doesn’t seem all that outlandish. Banchero is also a big guy at 6-foot-10, 250 pounds, he likely loses the weight and puts most of it back on right after the game, much like wrestlers and fighters do before and after weigh-ins.

On the flip side, a 2014 study suggests that an NBA player who plays over 30 minutes per game burns between 1,200 to 1,500 calories per game. Calories don’t account for water loss through sweat, but there is an adage that a 3,500 caloric deficit is needed to lose a single pound.

There doesn’t seem to be a lot of information out there when it comes to heavy sweaters like Banchero, but it’s clear that Duke is doing everything it can to keep their star freshman on the court and hydrated.