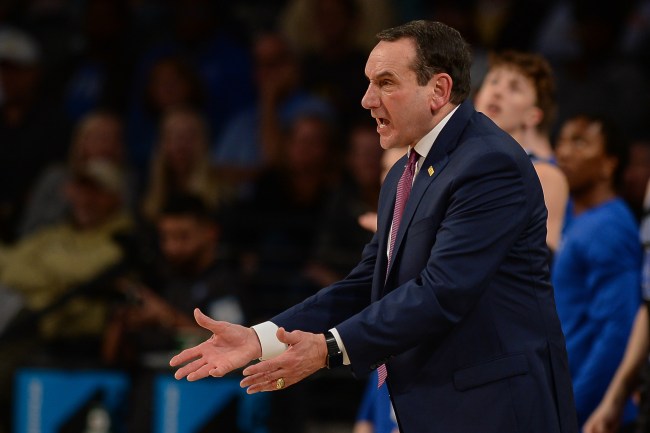 In a move that will probably cost him his invitation to his family’s Thanksgiving, Coach K’s grandson, Michael Savarino, got pulled over early Sunday morning for a stop sign violation and was then charged with a DWI. To make matters worse, Duke’s star player was in the car with him and was charged with aiding and abetting a DWI.

According to court records obtained by the Raleigh News & Observer, Savarino was arrested for DWI. Banchero was charged with aiding and abetting DWI. https://t.co/zFrsbGgb38

This would have been bad enough under normal circumstances, but with grandpa’s retirement tour as the backdrop, the timing on this could not have been worse for the Duke walk-on.

Duke’s season had gotten off to a promising start, winning their first three games of the season. That run included a season-opening win over Kentucky that had people believing Duke had put last year’s struggles and drama behind them.

That quickly changed to the college basketball world waiting to see how coach K handles this incident, with a matchup against Gardner-Webb on tap for tonight and Gonzaga and Ohio State waiting for the Blue Devils at the end of the month.

Reactions to the news have been all over the place. Some Duke fans are playing the “but what about Mark Few” card.

Zags fans better not be talking about this

Some are reveling in the possibility of Coach K’s retirement tour getting derailed by the news.

The Coach K Farewell Tour is off and runnin!!! https://t.co/RRhaGwqw3h

The common thread across Twitter seems to be that absolutely none of us know what “aiding and abetting a DWI” actually is.

“Aiding and Abetting” a DUI? What in the state of North Carolina ancient laws does that even mean?

Now we’ll wait and see what kind of punishments grandpa will be handing out in the next few hours and whether or not they fall in line with previous slaps on the wrist that Duke has handed out to their stars.