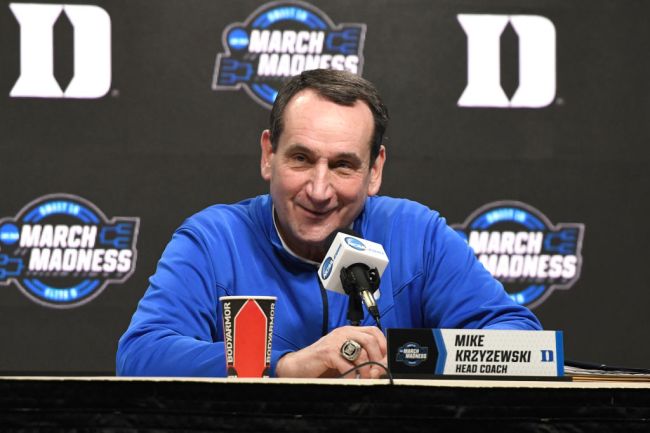 Somewhat surprising news hit the college basketball world on Wednesday as it was announced that Mike Krzyzewski would be retiring after the upcoming season. Coach K has spent the last 41 seasons at Duke, but the timing feels right for him to leave the program with the changing culture in college hoops, the fact that he’ll turn 75-years-old in February, and the NCAA starting to sniff around the program.

The longtime coach still has some surprises up his sleeve, however, as he made his entrance to his retirement press conference on Thursday afternoon with Cascada’s ‘Everytime We Touch’ blaring over the speakers.

A 74-year-old man walking onto a stage with ‘Everytime We Touch’ playing is undoubtedly going to create an uncomfortably cringe situation, but the actual video is one of the most bizarre things your eyes will ever see.

The real star of the video is the woman in the blue shirt. She’s already clapping overhead to the song, but when her lord and savior Coach K walks in, she stands up to show her respect and quickly intensifies her clapping. Then, when the chorus hits, she forgets where she is and dances as if she’s seven beers in during a post-work happy hour at Applebee’s.

I don’t know what I was expecting but it certainly wasn’t Mike Krzyzewski entering his retirement press conference dancing to Everytime We Touch by Cascada pic.twitter.com/yfkWgMITcV

If we’re being totally honest, though, it’s not all that surprising that Coach K is getting set to soak up every single second of his retirement tour, which is exactly what this season will be for him and Duke. The Blue Devils could go winless next season and not a single person would say a bad thing about the program.

Add the fact that Cascada’s all-time great bop has a long history with Duke basketball this whole scene is pretty on-brand.

The upcoming college hoops season is going to be nauseating.