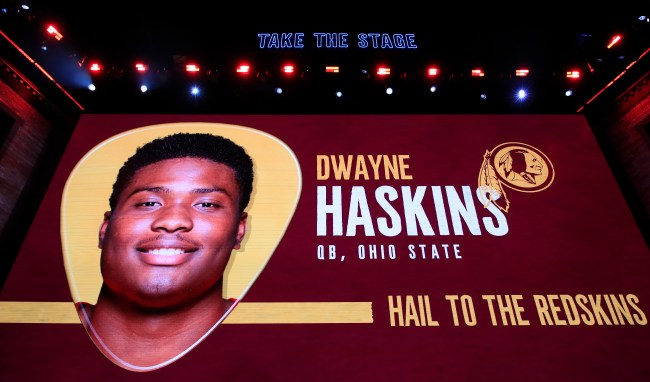 Dwayne Haskins may have been a first-round pick in this year’s NFL Draft, an accomplishment plenty of people would give their left pinkie finger for — but he probably wasn’t too thrilled that he dipped to No. 15 overall, ultimately being selected by the Washington Redskins. The former Ohio State quarterback, who actually charged people cover to attend his draft party last night, is from the D.C. area, but, after being projected to be a top-10 pick, his slide in the first-round was probably a bit of a shock.

That said, Dwayne Haskins doesn’t seem like he lacks confidence — as he recently replied to a comparison to Tom Brady by saying that, “from the neck up I feel I’m a lot like Tom Brady,” which is ballsy AF for a soon-to-be rookie to say. It’s that confidence that puts a chip on his shoulder, especially now that he has motivation to prove to the NFL teams who passed on him that he’s the real deal.

Talking Kalyn Kahler of SI.com, Haskins said he expected to end up with Washington, but it wasn’t the way he thought by going 15th overall, and now he’s got a message to the rest of the league:

“I knew Arizona would take Kyler, I knew that the Giants liked Jones, and I figured the Redskins might trade up to three, or they might trade up to eight, or five, but they got me at 15, so it’s great for both of us.”

“To be honest, I am more motivated now than ever,” he said. “There’s a bigger chip on my shoulder. The league done messed up.”

Another person who seems to be sending positive vibes Haskins’ way and encouraging him is Cleveland Browns wideout Odell Beckham Jr., who sent three simple words to the quarterback to keep him motivated: “show ’em why.”

That’s pretty cool of OBJ to do, because, like Dwayne Haskins, the wide receiver has tons of confidence and plays with a chip on his shoulder. And, if Haskins wants to “show ’em why,” who better than Beckham Jr. to help inspire him to do so.