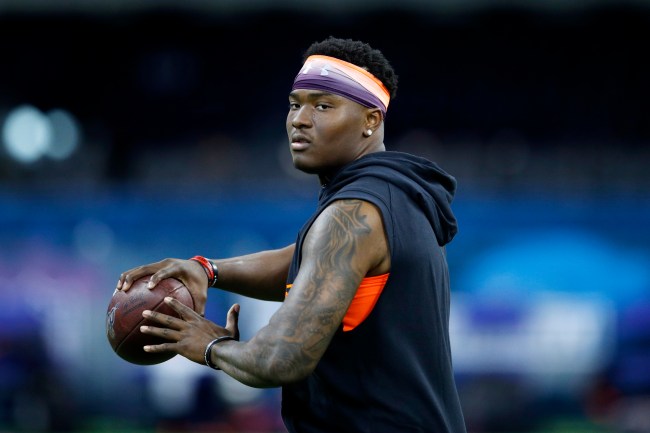 Dwayne Haskins might not be the best quarterback in this year’s NFL Draft on paper — that distinction is generally reserved for Kyler Murray, the presumed No. 1 overall pick — but the former Ohio State quarterback sure doesn’t sound as if he’s taking a backseat to anyone when it comes to playing the position. Yep, that even means putting himself up there with, arguably, the GOAT, Tom Brady.

About two weeks ago, the 21-year-old Dwayne Haskins got some major league praise from NFL analyst and former pro quarterback Trent Dilfer, who dropped Haskins’ name alongside Brady’s to get this entire conversation going. Here’s what Dilfer had to say to Albert Breer of Sports Illustrated when asked about this year’s crop of signal-callers in the NFL Draft.

“I thought Dwayne should’ve waited (to declare for the NFL Draft), but he’s the most like Tom Brady of anyone we’ve had. He sees it like Tom, he works at it, he plays that way. He plays on time, with his intellectual process. I don’t want to compare anyone to Brady, but he’s Tom Brady-ish.”

OK, so now Dilfer just put some serious pressure on Dwayne Haskins, right? Not only did he use Brady’s name in vain by comparing a soon-to-be rookie quarterback to him, but he then put the ball in Haskins’ court in terms of what his thoughts were about the comparison. Rather than give the PC answer and just try to get on base by playing it safely, Haskins went for a home run and actually ran with Dilfer’s comments, having said this to Sports Illustrated when asked about them.

“From the neck up I feel I’m a lot like Tom Brady,” Haskins recently told Sports Illustrated. “From how I study, to how much I commit to get ready for the game, to how I read defenses, to how I pick up protections and how I operate my guys. That’s a great comparison for me because I want to be like Tom Brady. He’s one of the best quarterbacks of all-time, if not the best. Just to be in the same sentence as ‘Tom Brady-ish’ is pretty cool to me.”

Oh, boy, this might be the worst omen in the history of omens for Dwayne Haskins. Honestly, if I were an NFL team thinking about drafting this kid, this is something I’d actually be concerned with. Does he really believe this, or is he just caught up in all the hoopla of the NFL Draft?

I’m not saying confidence is a bad thing, but for Dwayne Haskins — who is rumored to be going as high as No. 6 in the NFL Draft to the New York Giants, and about as low as about the middle of the first round — to be talking about himself in the same breath as Tom Brady is a little bit ridiculous. Maybe he should get drafted first and then go out there and prove his worth, rather than already talking about how he’s “Tom Brady-ish” before he even has his name printed on the back of an NFL jersey.

Some teams may like this, while others may be a little worrisome that, just maybe, Haskins thinks this whole NFL quarterbacking thing is going to be easy. Either way, let’s hope this doesn’t come back and bite him in the ass like other overly confident players in the past after being drafted. That’s something the sports gods aren’t too fond of.