There’s A Big Rumor Floating Around About Kyler Murray Already Being Linked To The No. 1 Overall Pick 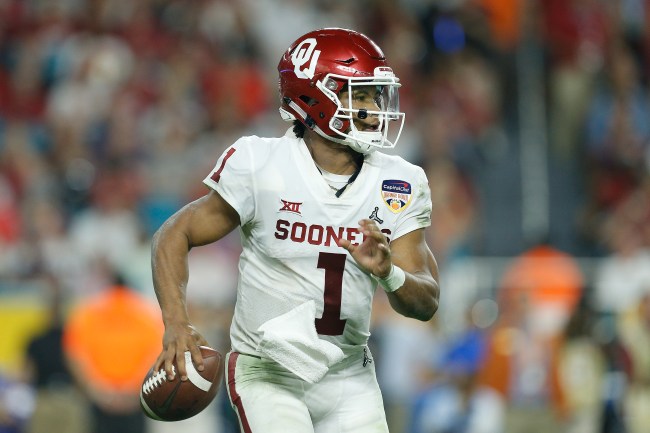 Kyler Murray officially announced via Twitter yesterday that he was “fully committing his life and time to becoming an NFL quarterback,” choosing the NFL over a dream of playing in the MLB. And, while the reigning Heisman Trophy winner will now be returning most of his $1.5 million signing bonus from the Oakland A’s and giving up his dream of playing baseball, there’s a ton of speculation as to where the quarterback could be selected in this year’s NFL Draft.

Most experts think that Kyler Murray will be a first-round pick, with ESPN’s draft guru, Mel Kiper Jr., eyeing the Miami Dolphins choosing him with the 13th overall pick. Given his slight frame, though, Murray’s draft stock is a bit unknown until he’s measured at next week’s NFL Draft Combine, where teams can see his height and performance measurables.

All that said, there’s one rumor floating around that has the Arizona Cardinals — owners of the No. 1 overall pick in the 2019 NFL Draft — already telling Kyler Murray that, had he committed to playing in the NFL, that they’d choose him with that pick. That’s according to Bleacher Report’s Matt Miller, who tweeted this out yesterday.

Current conspiracy theory: Cardinals told Kyler Murray they'd draft him at No. 1 overall and trade Josh Rosen if he committed to football.

Given the fact the Cardinals just used the No. 10 pick on quarterback Josh Rosen in last year’s draft, one would thing that the Kyler Murray rumor may be farfetched. But, remember, Rosen was taken by a former head coach, and the team’s new head coach, Kliff Kingsbury, try recruiting Murray to Texas Tech before the superstar landed at Texas A&M, then transferred to Oklahoma. So there’s a lot of familiarity between the two guys.

Oh, and just for a little added drama, don’t forget about this little video of Kingsbury previously saying that he’d take Kyler Murray No. 1 overall if he were an NFL head coach — which, at the time, he wasn’t.

"Kyler is a freak…..I would take him with the first pick of the draft if I could." pic.twitter.com/aYYamjMu7o

Things are getting spicy as we lead up to the NFL Draft, and, given the relationship between Kyler Murray and Kliff Kingsbury, this rumor about the Cardinals taking the Oklahoma star first overall might not be as crazy as it first sounds. One last thing to note: Murray signed with the same agent who represents Kingsbury, so these rumors about the quarterback ending up in the desert are sure to continue until draft day.