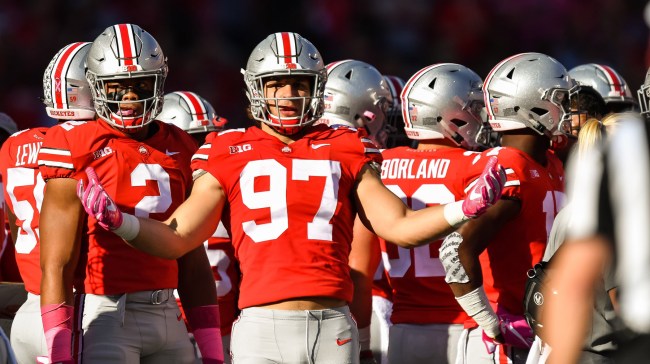 The annual wait is officially over. ESPN NFL Draft expert Mel Kiper has just released his first 2019 NFL mock draft with predictions for every pick in the entire first round.

Interestingly, Kiper projects three quarterback, Dwayne Haskins of Ohio State, Kyler Murray of Oklahoma, and Daniel Jones from Duke all to be chosen in the first round this year.

He has Haskins going to the New York Giants with the sixth pick, Kyler Murray ending up with the Miami Dolphins at number 13, and Jones landing in New England as the 29th pick.

“Think about where [Haskins] could go, yeah he could go one if Arizona traded out of there, but in a mock you don’t project trades, especially this early,” Kiper said on ESPN’s Get Up!. “Think about where the New York Giants are. Passing on Sam Darnold and all of the quarterbacks last year for Saquon Barkley, now at six, if Haskins is there it makes a lot of sense. (They are) looking for that heir apparent, obviously, to Eli Manning. Bring a young quarterback into the mix. Maybe you have to trade up to get Dwayne Haskins.”

As for Murray, Kiper says there’s a chance he could be taken before the 13th pick, but the sticking point for him might be his height, or lack thereof.

“Could he go a little higher than 13 to Miami? Maybe, but is he 5-foot-8? Nine? Ten? Is he going to focus just on football? There are questions still to be answered,” Kiper related. “But if he’s all in on football, he’s an athletic 5-foot-9 and Miami wants to rebuild, that would be a great spot for him.”

Kiper also believes that the combination of Tom Brady’s age (42 when the 2019 NFL season begins) and Daniel Jones’ pedigree (he worked in David Cutcliffe’s offense which has produced six NFL QBs) makes him a perfect fit in New England.

Oh yeah, his choice for number one overall to the Arizona Cardinals? That would be Ohio State’s dominant pass rusher Nick Bosa.

Kiper’s prediction for the first running back taken is… no one. Not a single running back. He does have the first wide receiver going to Baltimore choosing A.J. Brown of Ole Miss with the 22nd pick and the first tight end, T.J. Hockenson of Iowa, going to the Titans at number 19. But no backs.

Check out all of Kiper’s predictions for the first round of the 2019 NFL draft here or here.