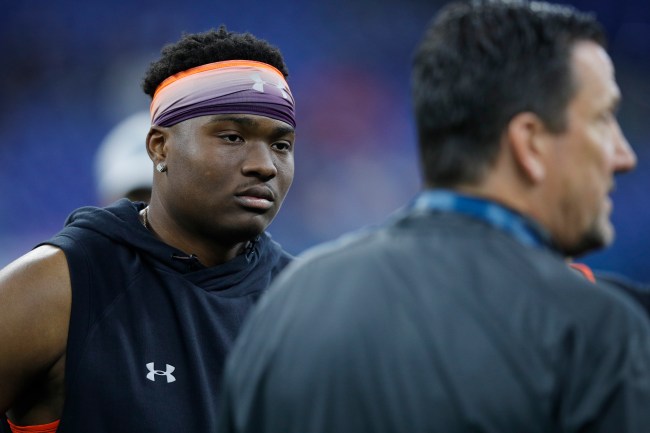 Dwayne Haskins lived out his dream last night when the Washington Redskins selected the former Ohio State quarterback No. 15 overall in the NFL Draft. While the bullish signal-caller fell a bit — he was projected by many to go in the top-10 — he seemed to be all smiles when his name was called by NFL Commissioner Roger Goodell. He was probably pretty happy considering he’s about to make millions of dollars, too.

But before Dwayne Haskins signs that big rookie contract he’s about to get, he wanted to get a head start on showing that he’s got the mind of a successful business man. That’s because Haskins, who wasn’t in attendance at the NFL Draft event in Nashville, but, instead, decided to host friends and family at a bowling alley to take in the entire night. We’ve seen things like that before, but I’m not sure any of us have ever heard of this — the dude actually charged people $50 to get into the door.

Dwayne Haskins had a draft party where he charged people $50 to get in. Always need a side hustle.

Is anyone else standing applauding this kid right now, because I sure am. After not seeing a single dime from his time playing college football, kudos to Dwayne Haskins for showing off that Ohio State education by getting a head start on a little side hustle. If he’s as smart as he is at making money this way as he is reading defenses, the Redskins just got the steal of the draft.

During the NFL Draft process, Dwayne Haskins responded to a comparison to Tom Brady by saying that he thinks he’s a lot like the six-time Super Bowl champ “from the neck up.” Considering Brady recently charged fans a boatload of money for his autograph — and didn’t even get to meet the GOAT — maybe Haskins actually is more like the future Hall of Famer than some of us originally thought.