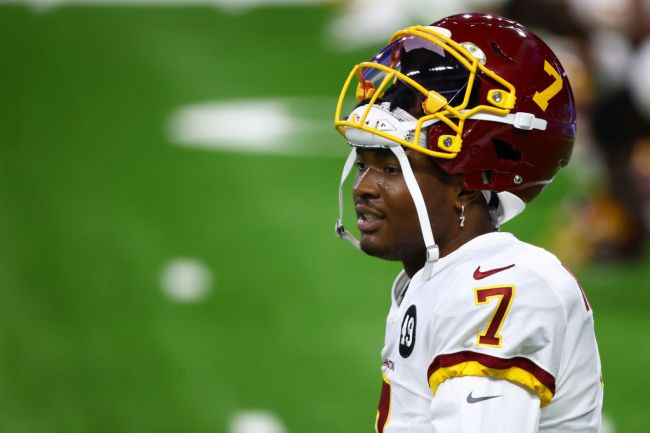 Dwayne Haskins and his wife Kalabrya Gondrezick-Haskins will have a story to tell from their recent trip to Las Vegas, that’s for sure.

The couple was reportedly in Vegas to renew their wedding vows when a bit of an altercation broke out, one involving Haskins’ wife allegedly knocking out his tooth. Gondrezick-Haskins now faces a felony charge of battery and domestic violence resulting in bodily harm, according to KTNV.

The alleged punch from Haskins’ wife came after the two reportedly got into an argument over their plans for that night. Apparently, Haskins and his friends decided to go to a nightclub without waiting for Gondrezick-Haskins and her friends.

It sounds like a classic case where the wife may have been taking a bit too long to get ready, so Haskins and his boys left her behind, which led to him having one less tooth in his head.

The Steelers’ QB was treated for facial injuries and his tooth was found in the hotel room.

According to KLAS, Haskins told a security officer that he wanted his wife out of his room and that she had cut his lip open. Haskins doesn’t appear to be angry with his wife now, however, as he posted a picture of them together on Sunday where she is showing off her wedding ring.

Haskins-Gondrezick, a former Michigan State basketball player, is set to be in court on August 3.

This is just the latest piece of off-field drama for Haskins. The former first-round pick was cut by Washington after two head-scratching seasons, the latter of which was highlighted by him breaking COVID-19 protocol by partying at a strip club without a mask.