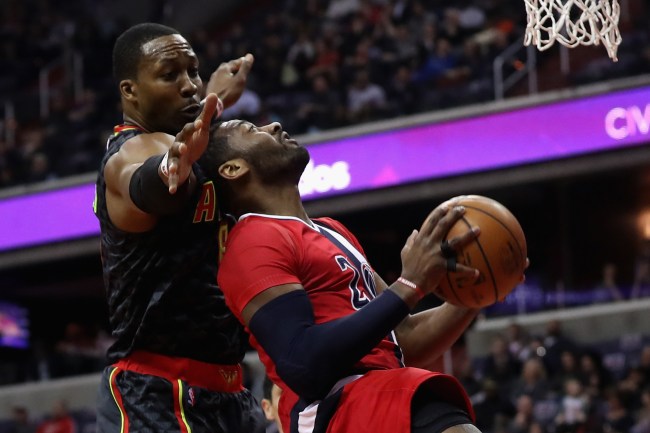 Dwight Howard signed a two-year, $11 million deal with the Washington Wizards in July, marking the sixth team ‘Superman’ will play for in his 14-year NBA career.

The 6’11”, 8-time NBA All-Star and three-time Defensive Player of the Year says that he joined the Wizards due to an elaborate pitch by star point guard John Wall–and by ‘elaborate pitch’ I mean John Wall sent him a seven word DM on Instagram saying simply: ‘do you want to come to D.C.?’

“No lie, when I saw the message on Instagram, I really got so happy. I was like ‘John just DM’d me, oh man this is crazy!’ After that, I really just started to put on my thinking cap,” Howard said. “I just thought about all the possibilities. I was like ‘man, this could be the best spot for me.'”

“He just said ‘do you want to come to D.C.?’ It wasn’t too much to be said. After he said that, I was like ‘bro, I’m with it.’ That conversation was like a confirmation for me,” Howard said. “Him reaching out, I’ve never had a guy like John Wall as a point guard, so why lose that opportunity?”

The 32-year-old center said that he considered heading West to Golden State before getting seduced by John Wall.

“Golden State called and I thought about them. But once John sent me that message, I was like, man. I couldn’t tell him at first, but I was like ‘man, I’m going to be a Wizard.’ That was my mindset,” he said.

Howard was likely enamored with the love considering he’s earned the reputation of being “soft” and a “teddy bear.” Those were Kobe Bryant’s words in 2015, not mine. Most recently, rumor has it that the Warriors came to a team consensus they wanted nothing to do with Howard. It’s nice to see the dude getting picked at recess.