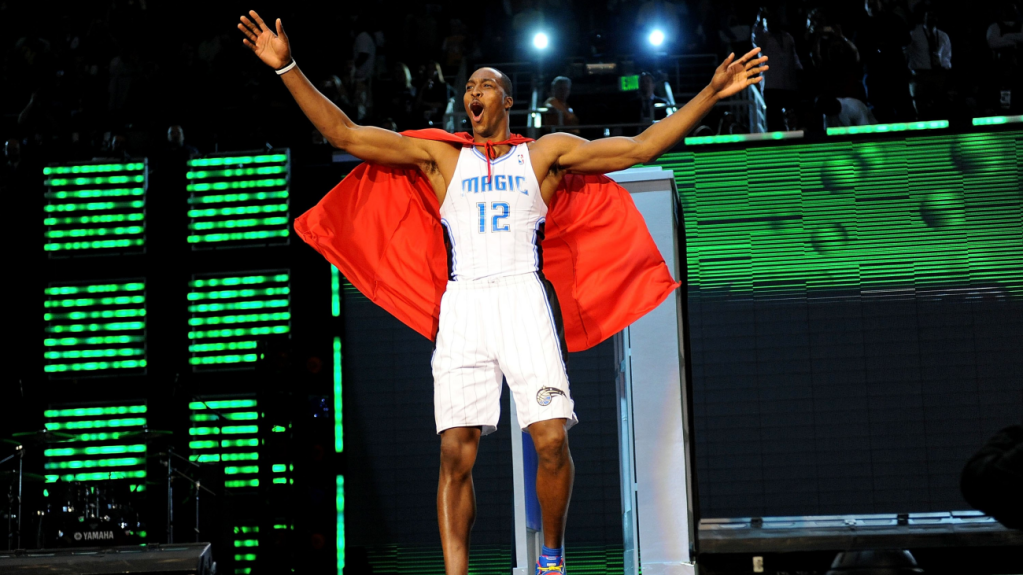 Dwight Howard was under contract with the Los Angeles Lakers for just one season (2021-22) and is currently an unrestricted free agent. He recently broached the topic of retirement, saying ‘I wanna play, but at the same time there’s no teams that really wanna allow me to play’ followed by talk of possibly calling it quits. But he isn’t officially retired yet and there’s some talk of the WWE in his future….

When Dwight Howard does eventually retire that will mean the end of his iconic red Superman cape that he famously wore during the 2008 NBA Slam Dunk Contest, a contest he won. And according to Dwight, he wore that cape not only on the court but behind closed doors as well.

Howard was recently a guest on BS w/ Jake Paul and Jake’s co-host asked Dwight if he’d ever worn the cape in the bedroom. Dwight laughs off the question pretty hard but then basically admits to it and flexes for the camera in a weird moment as the crew is all laughing.

Here’s that moment on video:

“Every time I look at it, it’s like a gold medal” — Dwight Howard.

You have to love the other host saying ‘think about it, if you won a Dunk Contest in that cape you gotta do that’ as if those two are somehow in any way connected. Maybe I’m just exposing myself for being wildly unfamiliar with what happens after the NBA Slam Dunk Contest though….

The full interview with Dwight Howard covers topics like whether Dwight Howard will retire from the NBA and head to WWE or Boxing (11:22). Jake Paul asks Howard about the current tumultuous situation with the Golden State Warriors after the Draymond Green fight (13:59). Then they topic changes to whether or not Dwight even wants to still play basketball (20:32).

You can watch the full interview with Dwight Howard here:

What do you guys think, will Howard appear on an NBA roster this season or is he headed to retirement?