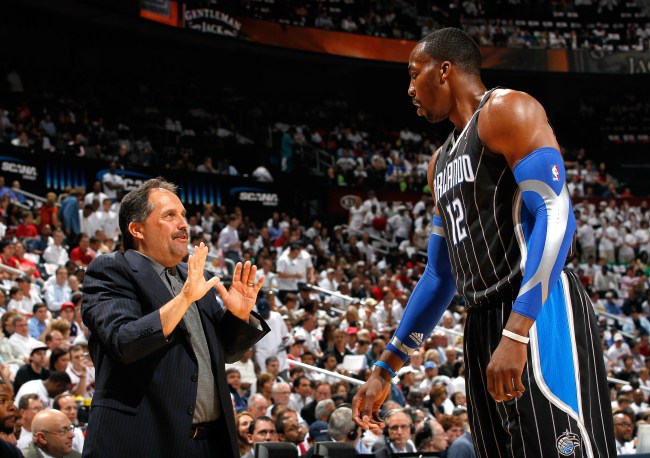 It remains one of the most awkward things to happen in a business organization since Michael Scott gifted the $400 iPod to Ryan in the Dunder Mifflin Secret Santa, far exceeding the $20 limit.

On April 5, 2012, then Orlando Magic coach Stan Van Gundy confirmed a report that former Magic star center Dwight Howard wanted him fired. As Van Gundy stood in front of droves of media, he said he was “uncomfortable with the BS” and expressed his knowledge of Howard betraying him. Seconds later, Howard forcefully buddied up to Van Gundy, condescendingly put his arm on Stan’s shoulder and said, “Yeah Stan, we’re not worried about that, right?”  Van Gundy said a few more words and jetted out of the interview.

In an appearance on ESPN’s “The Jump,” Howard recalled an incident involving Stan Van Gundy, calling it part of the “worst day of my life.”

“The first question is like ‘Dwight, they said you wanted to get Stan fired.’ I was like ‘Oh, my God,’ ” Howard recalled. “That was literally the worst day of my life. We had a game that night. And that was the worst game I ever played. Like, I could not hit the basket for nothing. And you would have thought — I don’t know what was going on that night, but it was the worst ever.

The Magic ended up losing 96-80 against the Knicks that night, Orlando’s fifth straight loss. Howard played 39 minutes, scoring just eight points, adding eight rebounds and three blocked shots. The Magic were bounced out of the playoffs that year in the first round by the Pacers.

It should be noted that although there was undeniable friction between Van Gundy and Howard, Magic CEO Alex Martins said Howard never asked him to fire Van Gundy.

Speaking of undeniable friction between Van Gundy and Howard, listen to this hilarious story told by Gilbert Arenas about an incident the two had during a game years back.

This story of Stan Van Gundy and Dwight Howard jawing at each other is truly WILD.https://t.co/Lfmr4zcq99 pic.twitter.com/MPlXzyiYod