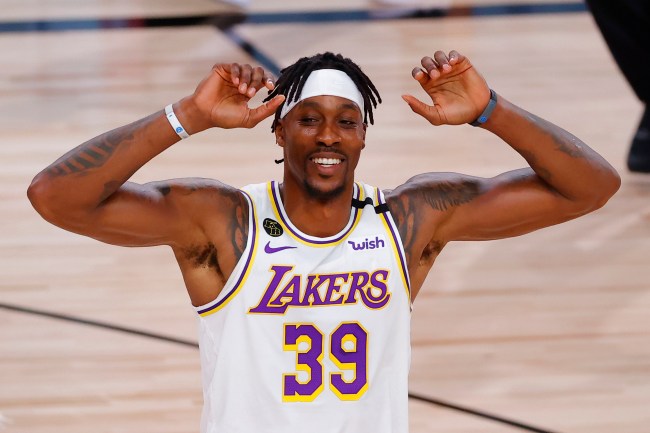 I don’t think I’m telling tales out of school here when I say that Dwight Howard is strange man. We may not be able to agree if masks are a sound measure against an existential threat or a signal of the weak, but we all can agree that Dwight isn’t playing with a full deck.

This was evidenced yet again in a recent TMZ report claiming two of Howard’s former associates are suing the brand new 76er for stiffing them out of thousands for work that included tending to his 200-pound snake.

Howard reportedly hired Armica Nabaa and Kamisha Shelman in December 2018 to provide personal management services, but after Howard fired his groundskeeper, butler and maid, they were tasked with keeping everything afloat at Dwight’s 35,000 square-foot mansion.

One of the job responsibilities that was not featured on the listing was tending to Dwight’s extensive exotic snake collection”comprised of a number of large snakes” including one named Cleopatra, “a constrictor that can grow to a final length of 25 feet and over 200 pounds.”

The two women claim Howard suddenly fired them in January 2020 while still owing them upwards of $50,000 in unpaid wages.

To add insult to injury, Nabaa claims she helped resurrect Dwight’s career by using her “network and contacts to connect Mr. Howard with individuals that resulted in his lucrative and unexpected contract with the Los Angeles Lakers,” with Dwight even giving her partial credit for helping land the championship-winning Lakers deal during a national television interview.

After a decade-and-a-half of never sniffing an NBA title, Dwight allegedly stiffs the one woman who helped facilitate the LeBron coattail ride. Imagine how he’s treating the people who he can’t extract anything from.