Dwyane Wade Piles It On Charles Barkley For Calling Out His Buddy LeBron, Says Barkley Should ‘Shut Up’ In Rant 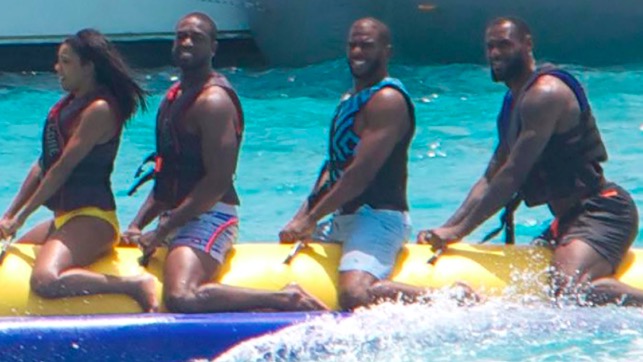 Last night, the Dallas Mavericks handed LeBron James his first losing month in a decade. The Mavs bested the reigning champs 105-101 and avenging their most lopsided loss of the season, getting hammered by the Cavs 128-90 back on Nov. 25.

The Cavs are still in solid shape, leading the Eastern Conference with a 32-15 record (although they should be weary of Isaiah Thomas and the pesky Celtics only 2.5 games back), but amidst the losing streak, LeBron has expressed his frustrations with the Cavs lack of playmakers.

Charles Barkley, who played for three teams during his career but never won a championship, has frequently called out James for his “whining” about playmakers–citing Kyrie Irving, Kevin Love, and the newly acquired Kyle Korver as plenty of ammo to dominate. Yesterday, Barkley went on a bit of a tirade against LeBron, and LeBron hit back HARD by calling Barkley out on a personal level.

Thank God he finally said something. LeBron, a lot of guys take a lot of shots at him—for whatever reason. He has just kept his mouth closed and continued to focus on what he needs to. But it’s about time he said something, man. Guys ride him, especially ex-players. When you have a history, when you can go and Google your history, you better be a little careful with what you say. Sometimes, when guys get a microphone in front of their face, they just talk and talk and talk and forget about their history. We all make that mistake, but especially that guy on TV. He acting like he just walks on water. And I like the fact that LeBron called him out and told him about himself a little bit. Humble yourself. LeBron is who he is. We all have flaws. But when your flaws are a little bit more, you should shut up. I’m glad LJ finally said something and stood up for himself from that standpoint. He said there’s a new sheriff in town. So I’m excited to see what’s next.

Now excuse me while I grab some popcorn and wait for Barkley’s response.