Dylan Frittelli Makes Incredible Shot From A Tree To Save Par, Later Is Hit With 2-Stroke Penalty 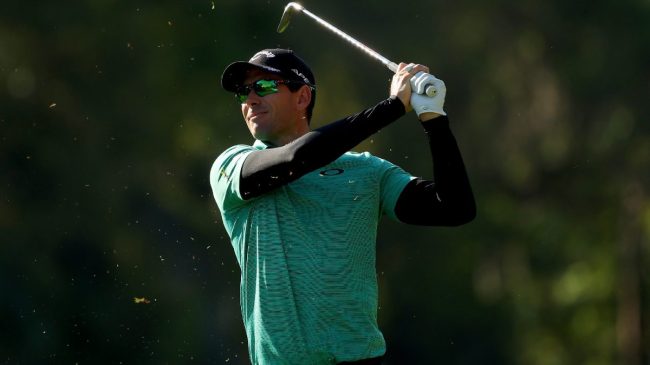 The RBC Heritage took place over the weekend and turned out to be one of the more entertaining tournaments of the year.

The leaderboard was back and forth over the four-day event, with Jordan Spieth ultimately winning the Heritage in a playoff over Patrick Cantlay. A little advice from his wife, Annie, helped him notch the victory.

While fans were watching the drama unfold in that exciting finish, they might’ve missed one of the more impressive shots on the day.

On the final day of play, golfer Dylan Frittelli found himself in an undesirable situation.

After sending his opening drive on hole number six into the woods, Frittelli took to searching for his next shot location. After a few moments of looking, he found his ball safely nested in a tree limb.

Frittelli decided to play it from the mossy limb, standing behind the ball and successfully smacking it into the fairway. He’d find the green on his next shot and subsequently sink a 10-foot putt to somehow save par. Frittelli said it was the “greatest par of his life.”

Or so he thought…

I thought this would be the greatest Par of my life 😲 I was assessed a 2-stroke penalty for “standing astride” my intended line of play during this shot. The rules of golf remain undefeated ✌🏼 🙄@SportsCenter top 10 play maybe? pic.twitter.com/KvnIIsXuQ9

The PGA assessed him with a two-stroke penalty after the fact, saying that he was “standing astride” the intended line of play.

c. Making Stroke While Standing Across or on Line of Play
The player must not make a stroke from a stance with a foot deliberately placed on each side of, or with either foot deliberately touching, the line of play or an extension of that line behind the ball. For this rule only, the line of play does not include a reasonable distance on either side.

Essentially, you can’t stand directly behind or in front of the direction you’re planning on hitting the ball. Instead, you must have your feet on either side.

This rule seems like it could have an effect on putting, but very rarely would you see someone attempting to hit the ball from behind anywhere other than the green.

With the two-stroke penalty, Frittelli finished at +1 on the weekend. Had he been awarded the par, he would’ve wrapped up at -1, meaning the strike wound up costing him more than $1,500 in prize money.