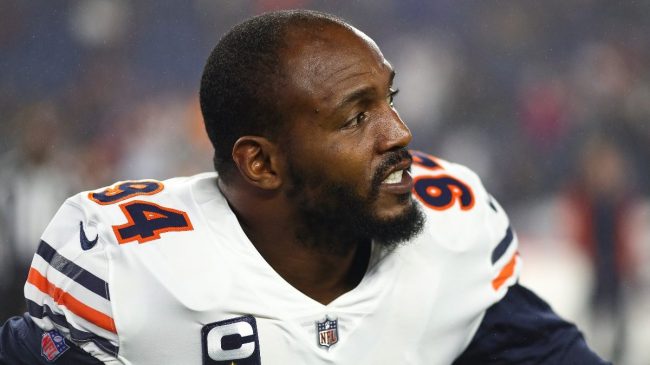 The Philadelphia Eagles are clearly all-in on making a Super Bowl run this year. After having a wildly active offseason to improve the roster, the front office made a big trade on Wednesday. It appears the Chicago Bears have sent star defensive end Robert Quinn to Philadelphia right before the trade deadline.

According to Ian Rapoport and Mike Garafolo, Philly has officially traded for Quinn. So, that means the Eagles load up their defense yet again amid their strong run in the regular season. Additionally, Philadelphia acquired Robert Quinn by sending the Bears a fourth-round pick, per Ian Rapoport.

Although Quinn is a bit on the older side, he still has plenty of gas left in the tank. As Dov Kleiman points out, the former Bears defensive end was rather productive just a season ago. Now, Robert Quinn joins a hungry Eagles defense where he can thrive as a role player.

Robert Quinn recorded 18.5 sacks last season for the #Bears, playing in 16 of the 17 games.

He’s 32, so much more affordable than Bradley Chubb and Brian Burns and still has some left in the tank, @RapSheet was first with the news.

In all, Eagles fans are stoked about this trade. They maintain their Super Bowl chances while obtaining a solid defensive end for the remainder of the season. Philadelphia might be dancing in the streets right now (or climbing greasy poles).

All of Philly this week pic.twitter.com/SPmvRQ8JEG

We’ll see how the trade pans out. For the Bears, they receive a solid asset to increase their chances of securing a solid prospect for their young roster. Meanwhile, the Eagles improve their chances of making a serious playoff run.