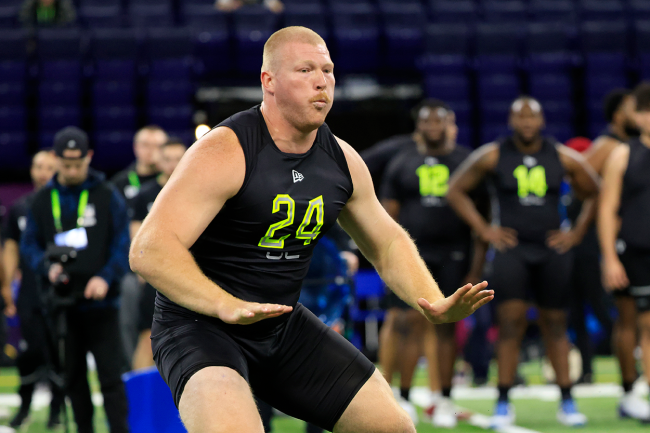 With the No. 51 overall pick in the second round of the 2022 NFL Draft, the Eagles selected Cam Jurgens out of Nebraska. The Nebraska-native is not only a mauler on the offensive line, but he is a Cornhusker through and through.

At 6-foot-3, 303 pounds, Jurgens fits the part. He is slated to be Philadelphia’s future at the center position after veteran (and future Hall of Famer) Jason Kelce hand-picked his replacement at the position.

When it comes to his on-field play, he is a problem for opposing defenses. Jurgens is a beast.

His tape is an absolute joy to watch and he was one of the biggest leaders on Nebraska over the last few years. That, obviously, is crucial for one of the only two players who touch the ball on every single play.

Off of the field, Jurgens is quite the character. He gained a reputation as a morale guy in the locker room and is rather entertaining when he opens his mouth.

Additionally, he is always out having fun.

He grew up on a cattle farm outside of Beatrice, Nebraska, which has a total population of about 12,200. It’s a constant grind.

“I would just say it never stops,” Jurgens said to the Philly Voice. “Farming never stops. You have to feed the cattle, I guess. There’s a lot of stuff on the ranch to be done, and you have to treat them like they are family.”

While out raising cattle growing up, and even as recently as last spring, Jurgens used every opportunity to get better on the field. A video that has recently gone viral (again) shows the newest Eagle herding cattle with perfect pass-blocking footwork.

If he can box out a cow of that size with such ease, Jurgens should be just fine in the NFL. Just so long as he doesn’t have to get into a trench war against the sun.

On a scale of bad to disgusting, guess how red my sunburn was after this range session? 🔥🔥 pic.twitter.com/FbeEgdqGnx

Everything about Jurgens is awesome, from his play, to his ranching, to his extremely gregarious personality. Even if you’re a Giants fan, it’s hard to root against him.