Dysfunctional Eagles Reportedly Criticized Every Decision Doug Pederson Made, Organization ‘Treated Him Like A Baby’ 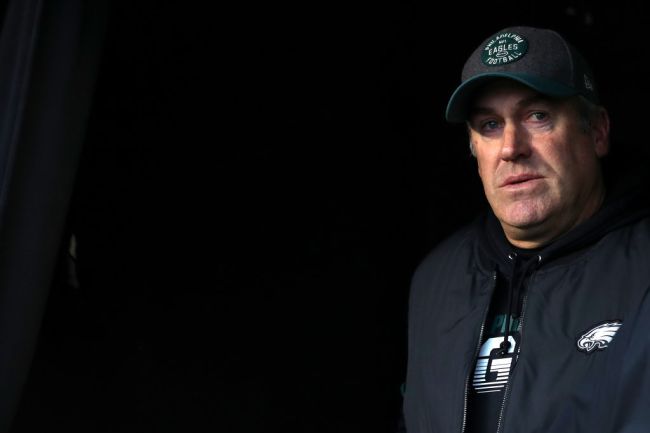 The Philadelphia Eagles are a complete mess. You already knew that, but with more and more reports and rumors coming out of Philly about the organization’s dysfunction, we’re not starting to get a real glimpse as to just how bad things truly are.

According to a new report from The Athletic citing an anonymous source, to no real surprise, the trouble starts at the very top in Philadelphia, with owner Jeffrey Lurie and general manager Howie Roseman.

The source singles out the situation involving now-former head coach Doug Pederson and how critical those in the front office were with every move he made. It sounds like Pederson was in a brutally tough spot, and some may even suggest a lose-lose situation with the organization as the source explained he was treated ‘like a baby.’

“[Pederson] was ridiculed and criticized for every decision,” the source told The Athletic. “If you won by three, it wasn’t enough. If you lost on a last-second field goal, you’re the worst coach in history.”

The report also detailed specific instances and situations to back up these claims made by the source. Apparently, Pederson was forced to have sit-down meetings with Lurie and Roseman every single Tuesday, which were filled with scrutiny. In 2017, the feeling within the organization was that the team was preparing a replacement for Pederson, but Pederson was able to manage all of that in the best way possible, by winning the Super Bowl.

The report also laid out that Roseman was constantly concerned with his own self-paranoia and how he is portrayed outside the organization. Roseman allegedly scolded employees and threatened to search phones when inside information was leaked.

Best of luck to Nick Sirianni during his first year in Philadelphia, it certainly sounds like he’s going to need it.