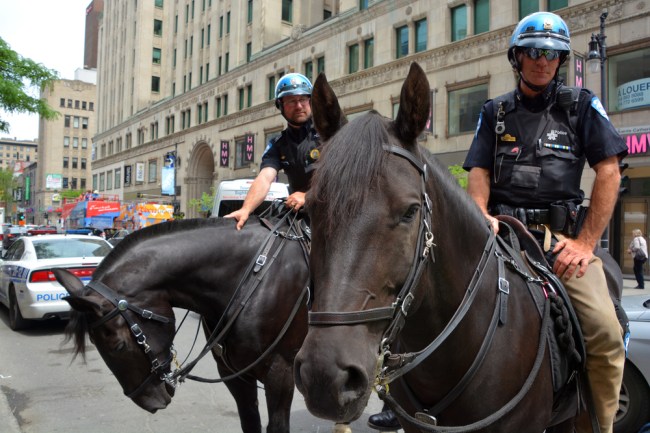 A small portion of Philadelphia sports fans refuse to let the stereotype of being awful human beings die. Whether it is breaking the leg and dislodging the eye from its socket of Redskins’ unofficial mascot in the Veterans Stadium parking lot, throwing beer bottles at their own players, cheering Cowboys’ receiver Michael Irvin being carted off the field after suffering a serious neck injury, throwing wristbands onto the ice that were to commemorate the life of late Flyers owner Ed Snider who died a week earlier from bladder cancer, purposely puking on police officers and 11-year-olds, and of course the infamous incident where Philly fans booed and threw snowballs at Santa Claus. Time and time again, some Philly fans show the worst side of passionate sports fandom. The latest example of Philly sports fans being terrible is an Eagles fan punching a police horse.

Eagles fan Taylor Hendricks was at Saturday’s playoff game at the Linc. Apparently, Hendricks somehow got inside the stadium despite not having a ticket or lost it. Hendricks was ejected from the playoff game for not having a ticket and for being heavily intoxicated. After he was thrown out, Hendricks approached a police horse and repeatedly punched it in the face. Then he punched the Philadelphia police officer who was riding the horse. AND THIS WAS WHEN THE EAGLES WON A PLAYOFF GAME. Imagine what would have happened if the Eagles lost?

After striking the horse and the officer in the legs he was arrested and charged with aggravated assault, illegally taunting a police horse, simple assault, and defiant trespass. The 22-year-old posted 10 percent of $5,000 bail and was released around 4 a.m. Sunday morning. Hendricks has a preliminary hearing scheduled for January 30th and police say he may face additional charges of animal cruelty. Plus he may be permanently banned from Lincoln Financial Field. The only thing positive about this story is that I get to post the “Cop Killer” scene from Half Baked. Stay classy Philly.