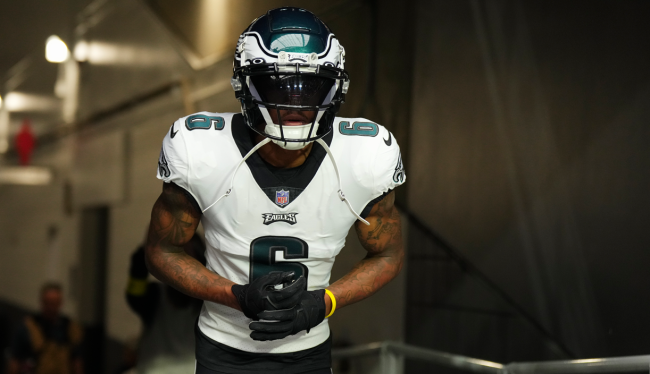 Unbeknownst to most people in the stadium and those watching on TV Sunday night, a random Philadelphia Eagles fan somehow managed to run out of the tunnel with the team before the Cowboys game.

Unfortunately, the fan, unlike almost everyone in the stadium and those watching on TV Sunday night, didn’t get to see the first play of the game.

In fact, he probably didn’t get to see any of the plays during Sunday night’s Eagles 26-17 win over the Dallas Cowboys.

As the Eagles were running out of the tunnel prior to the game, our hero can be seen running out with the players and waving a towel to the cheering crowd.

After fulfilling the dream of scores of Eagles fans, Lincoln Financial Field security put an end to the fan’s fun, grabbing him and helping him wobble off the field back into the tunnel from whence he came.

I’m not sure what the biggest highlight of the video was: him waving his towel like he really belonged there, his inability to put one foot in front of another once security corralled him, or the woman in the background yelling at him, “What is wrong with you?!”

Jeff McLane, Eagles reporter for Philadelphia Inquirer, tweeted after seeing the fan run out of the tunnel, “Hilarious. Said to colleague @EJSmith94, ‘First time I’ve ever seen the #Eagles allow this during intros.’

“His response: ‘Must be Make a Wish or something.’

“Players musta thought the same, too, as Jason Kelce and others returned his low fives.

They came out of the gates fired up and started the game 20-0. They should invite him back next week

The Inquirer reports that “sources with knowledge of the situation and protocols at Lincoln Financial Field, the Eagles will investigate the incident and then determine what punishment is warranted.”

We were at the game and I didn’t even notice him. Here is another angle from our seats of the legend!! #flyeaglesfly #gobirds pic.twitter.com/ndK7ImBqXs

Regardless of what that punishment ends up being, as Philly Sports site Crossing Broad said when discussing the Eagles fan, “He’ll just have to use his wife’s name to buy Eagles tix now. Everyone knows those stadium bans are more of an ask than an order. The Russell Westbrook popcorn guy probably went to 10 games last year.”

He did it! That’s a dream of many a person. To run out of the tunnel onto to your NFL teams field during an actual game!