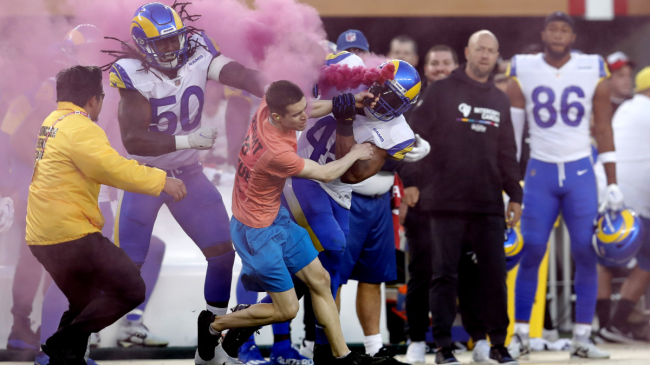 Rams’ linebacker Bobby Wagner made headlines for making a big hit during Los Angeles’s recent matchup with the 49ers. That tackle didn’t come in gameplay, though. Rather, he manhandled a protestor who ran onto the field.

The vicious hit sent the fan tumbling, and it apparently did some significant damage (not surprising coming from an NFL defender).

On Tuesday, it was discovered that the protestor suffered a number of injuries, including a concussion. Other afflictions include a headache and a burn on the right arm.

Obviously, the concussion is the most serious of the setbacks. It’s been an issue that’s been at the forefront of the NFL following incidents involving Dolphins’ QBs Tua Tagovailoa and Teddy Bridgewater.

But while many football fans took those injuries seriously, it doesn’t appear they’re giving much sympathy to this protestor. Take a look at the reaction online.

NFL fans didn’t show much compassion for fan, who illegally ran onto the field. Many are going as far as to say he got what he deserved.

Wagner, himself, said he was more worried about the safety of the security offers than the protestor. These fans agree.

This Twitter user sarcastically wrote, “Oh no, that’s so sad. I’m deeply heartbroken to hear someone got hurt running on a football field during a game against the law.”

Oh no, that's so sad. I'm deeply heart broken to hear some one got hurt running on a football field during a game against the law.

Another said, “Don’t run on the field then,” after hearing that the protestor suffered a concussion.

Don’t run on the field then. Bye.

One person commented, “He did something dumb and paid the consequences.”

So what 😂 he did something dumb and paid the consequences

After seeing all the replies on social media, this fan hilariously wrote, “The responses are the most united we’ve been as a country in years.”

The responses are the most united we've been as a Country in years.

This will probably be the last time the protestor tries a stunt like this.