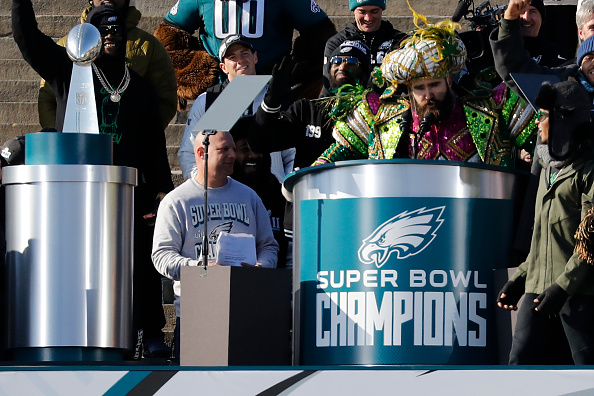 Eagles center Jason Kelce gave an impassioned speech during the Super Bowl parade in Philadelphia. The inspiring diatribe truly moved people, some more than others apparently. The speech was so exhilarating that it compelled one diehard Eagles fan to get a tattoo of Kelce delivering his Super Bowl parade rant. It even featured Kelce’s flamboyant Elton John-esque ensemble from the championship parade. At 10:40 PM on Thursday, Jordan Clarius showed the world his one-of-a-kind tattoo on Twitter.

Amazingly, Clarius was able to get a tattoo of the Philadelphia Eagles All-Pro center only a few hours after the epic speech. In all of Kelce’s Super Bowl parade glory, the NFL player looked like a new WWE wrestler who is one part genie, one part Leprechaun, one part Mariachi band member, and one part Mardi Gras reveler. And now the unforgettable image will be etched onto this gentleman’s body forever. You can’t dispute that Eagles fans are dedicated to their team.