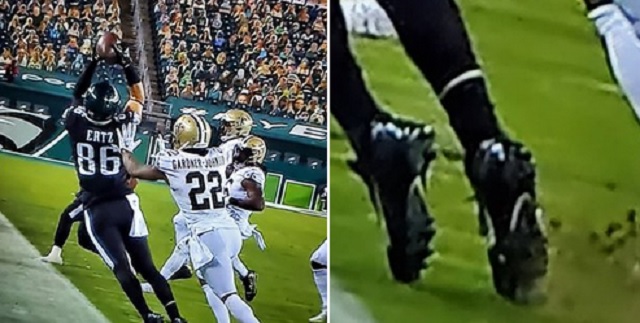 It appears that Zach Ertz was robbed of a catch by officials and Eagles fans aren’t happy about it.

Late in the second quarter, Ertz appeared to make an incredible sideline catch while keeping both feet inbounds.

Amazing catch by Ertz. That should be ruled a catch on review. Held on and got both feet in #Eagles

Zach Ertz was a ballerina at some point in his life, I’m convinced pic.twitter.com/MzSjaFaOXj

The refs reviewed the play and it was somehow ruled incomplete which instantly annoyed Eagles fans.

Wait… they said that wasn't a catch for Zach Ertz? What the hell were they looking at?

that was a helluva play from both Hurts & Ertz that disgusting refs ruined.

Also that’s a ridiculous review that wasn’t overturned cause Ertz had both feet down and the catch. Makes you wonder what the hell the review refs are seeing or better yet not seeing.