Eagles Starting Left Tackle Jordan Mailata Is 6’8″, 340 Pounds And Has The Voice Of An Angel 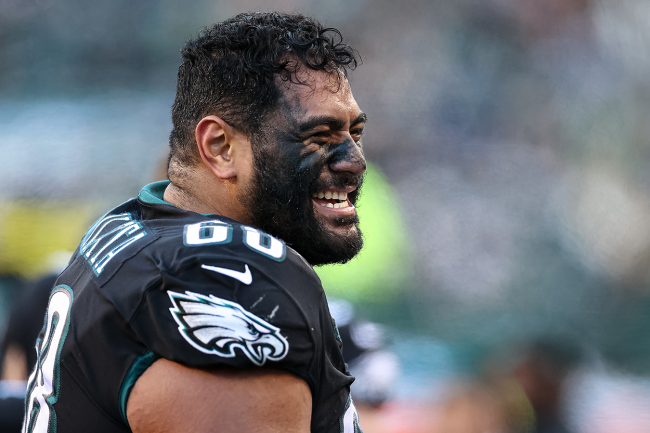 Philadelphia left tackle Jordan Mailata is more than just a big body dominating opposing edge rushers on Sundays, he has some serious pipes. The 24-year-old Australia-native is not only turning heads with his on-field play, but he turned some heads as a vocalist.

Mailata, who had a very interesting journey to the NFL, first went viral prior to last season for his amazing performance of ‘Tennessee Whiskey’ during a team meeting. Now, almost a year later, he took his talent nationwide, kind of.

Fox’s hit series ‘The Masked Singer’ aired its third episode of Season 7 on Wednesday night and Mailata was revealed as a contestant. Dressed as ‘Thingamabob,’ he performed Ed Sheeran’s ‘Perfect’ during the first round and impressed everybody with his sultry voice.

However, after an impressive first performance, Mailata performed MKTO’s ‘Classic.’

While he did a great job, especially considering that he is a professional offensive lineman, it wasn’t enough to keep him in the competition. After the voting, Thingamabob was forced to reveal his identity.

Mailata took off his mask and showed the world that he is more than just a left tackle.

Should the NFL not work out, or perhaps whenever he is done playing, Mailata should get in a recording studio. He can really sing!

Is Jordan Mailata the most talented man in the NFL?

Not only can Mailata sing, but he is so athletic that the Eagles didn’t even know what to do with him at first. They initially wanted to play him at running back.

Mailata initially pursued a professional career in rugby and his highlight tape is legendary. Nobody could stop him, ever.

After literally growing out of his rugby position, Mailata joined the NFL’s International Player Pathway Program and put on a set of football pads for the first time in 2017. Now, five years later, he is set to be the incumbent starter for the Eagles.