Eagles OT Jordan Mailata Is 6’8″, Weighs 346 Pounds, And The Team Is Considering Using Him As A Running Back???? 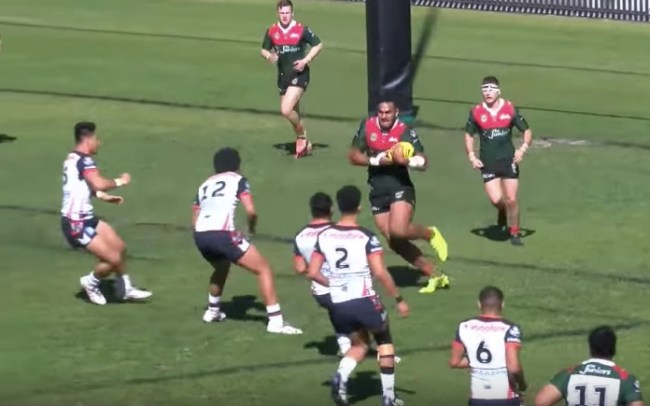 Jordan Mailata has yet to play a game for the Philadelphia Eagles but the future looks bright for the 6’8″ rookie from Sydney, Australia. He weighs 346-pounds and is a former Australian rugby player.

At this point in time, Jordan Mailata is easily the most beloved player on the Eagles’ roster that has never played a single down. NBC Sports Philadelphia points out that Jordan’s a long-term project for the Eagles, a player they want to develop over a lengthy period of time because they see he has all of the tools and skills required to become a star in the NFL but he doesn’t have the muscle memory and knowledge of the game yet.

The Eagles face off against NFC East rival Dallas Cowboys at home on Sunday Night Football this week. Despite being the reigning Super Bowl champs, the Eagles boast a questionable 4-4 record this season while the Cowboys having a losing record (3-5). This probably isn’t the week we see Jordan Mailata in action but he’s still being talked about by the coach.

At a press conference earlier in the week, Eagles head coach Doug Pederson was asked a question about Jordan Mailata that appears to have caught him by surprise. He was asked if the 346-pound former rugby player who has a sick highlight reel on YouTube (video below) would ever be used as a running back like William “The Refrigerator” Perry.

That’s a good question. I don’t know. He’s definitely used to carrying a larger football. Do they call it a football? I don’t know what they call it. A ball? Very athletic guy. It’s intriguing. It’s not out of the question.

“Give him the ball on the goal line,” head coach Doug Pederson interjected with a smile before Joe Douglas gave his answer shortly after the Eagles drafted Mailata.

“What you saw on the YouTube , I’m sure you all have seen it,” Douglas said. “You’ve seen a big man that people are bouncing off of. We also brought in Adam Zaruba last year, so we weren’t averse to go into the rugby pool. That was impressive. It definitely was an eye-opener, watching the YouTube.” (via)

Will it happen? Who knows. I think it’s more likely to happen now after someone asked Doug Pederson that question because it appears as if he’d never considered it as an option before. Just check out Jordan Mailata’s 2017 rugby highlight reel and tell me it would be a bad idea to at least *try* this out once on the field. He’s got wheels, power, and agility. His biggest drawback is that he’s enormous so he’d be fairly easy for a tackler to target.

The Eagles need to make this happen. It’s hard to get a real sense of just how massive Jordan is until you see him standing next to other enormous pro athletes. Just imagine this dude coming in at running back. It’d be amazing. Just as long as he was able to get some oxygen in his lungs and back on the field at OT when they needed him, it seems like an amazing way to ease him into the game.