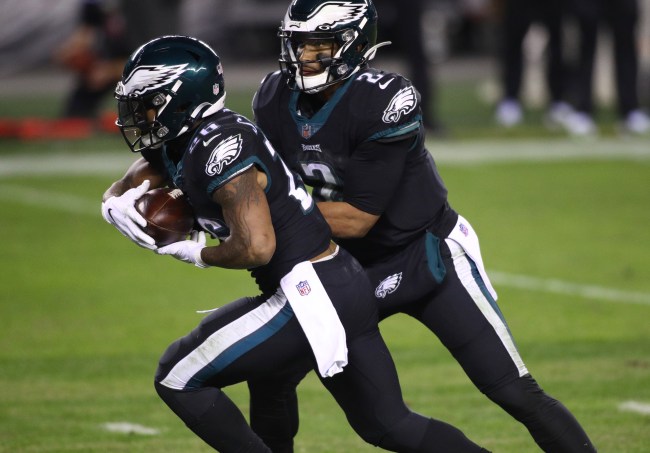 There’s more some drama coming out of Philadelpphia after head coach Doug Pederson decided to bench starting QB Jalen Hurts for third-string QB Nate Sudfeld during a close game against Washington on Sunday.

On Monday night, Jeff McClane of the Philadelphia Inquirer reported that several Eagles players were unhappy with the coach’s decision to bench Hurts and had to be held back from confronting Pederson on the sidelines during the game.

Two players had to be held back from confronting the coach. A few more measured were able to question him.

When Doug Pederson pulled Jalen Hurts for Nate Sudfeld early in the fourth quarter in Sunday’s season finale against Washington, many Eagles players and coaches were shocked and outraged, team sources told The Inquirer.

Some were angry. Two defensive players had to be held back from approaching Pederson. Center Jason Kelce and another offensive starter went to the coach to ask him why he had pulled the starting quarterback with the Eagles trailing by only three.

During a radio appearance on 94.1 WIP Tuesday, Eagles running back Miles Sanders admitted that nobody on the team was happy with the decision but isn’t sure who to blame for it.

Miles Sanders on @SportsRadioWIP on Jalen Hurts sitting" "Man if I'm being honest, nobody liked the decision, nobody. That's all I can say really. I don't know who was the main person behind that decision. All I know is that a lot of people on the team was confused." #Eagles

Apparently Eagles players were aware about the possibiliy Sudfeld could play in the game but didn’t like the fact that Pederson inserted him in while the team still had an opportunity to win.

As I reported, some players and coaches had some inclination that Nate Sudfeld could play. I mentioned as much Saturday. Some had no idea. Pederson never communicated it to the team as a whole. But what stirred the sideline was WHEN and HOW it occurred. https://t.co/H5aVKLjbNY

It’s pretty clear to anyone with football knowledge that Pederson and the Eagles were tanking for a better draft pick, maybe they should have given the players are heads up before it happened.