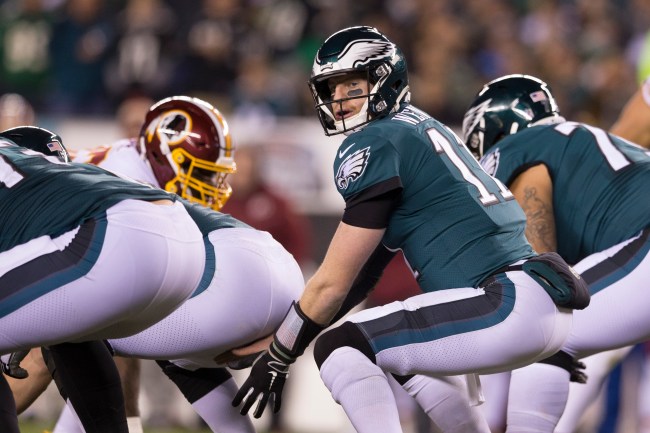 “Selfish. uncompromising. egotistical.” These are words that could be used to describe many NFL players, none of which have been used as a character assessment of Philadelphia Eagles quarterback Carson Wentz. Until now.

Joseph Santoliquito of the Philly Voice spoke with more than a half dozen players and other sources close to the team to determine why the Eagles experienced a Super Bowl hangover, going 5-6 in the return of Carson Wentz following a near-MVP season.

Mike Groh, the Eagles new offensive coordinator, has been getting the lion’s share of blame for the Eagles’ offensive inconsistencies. But, anonymous players have reportedly dubbed Groh “a good coach” who was “bullied” by Wentz. And that is the least of the negative sentiments being thrown Wentz’s way in the media.

His aw-shucks, overgrown-Opie-from-Mayberry routine plays well with the local and national media. Indeed, sources describe Wentz as “incredibly hard working,” “determined,” and “highly intelligent.” But the true Wentz is more nuanced and complicated, with sources describing him as “selfish,” “uncompromising,” “egotistical,” one who plays “favorites” and doesn’t like to be “questioned,” one who needs to “practice what he preaches” and fails “to take accountability.”

Numerous sources confirmed Wentz was once verbally attacked by a highly respected teammate for not being “a team guy.”

“Carson Wentz’s biggest enemy is Carson Wentz,” one source said. “He’s had his ass kissed his whole life, and sometimes acts like he’s won 10 Super Bowls, when he hasn’t played in, let alone won, a playoff game yet. Everyone around him wants good things for him. He did more thinking on the field than he did playing (in 2018). You don’t have to be a brain surgeon or a football expert to see how differently this team plays and reacts with one guy as opposed to the other.”

Sources have also claimed that Wentz’s over-reliance on Zach Ertz has frustrated the rest of the offense, as Wentz is a guy who “plays favorites” rather than goes through his progressions.

The report has since been debunked by Eagles’ defensive leader Fletcher Cox and a bunch of other Eagles players.

Whoever wrote that article needs to check their "sources". #fakenews

Carson has been and is our leader and our QB. Y'all know where to find me if you have any issues.#flyeaglesfly

Don’t believe everything you read!!! Carson has been nothing but a GREAT person, GREAT teammate and GREAT leader since Day 1. Our locker room stands behind him all the way. We can’t wait to get back to work and be the best team we can be in 2019! #FlyEaglesFly

With Nick Foles leaving this offseason, it will be interesting to see if a totally healthy Carson Wentz will bring Philadelphia back to football supremacy.