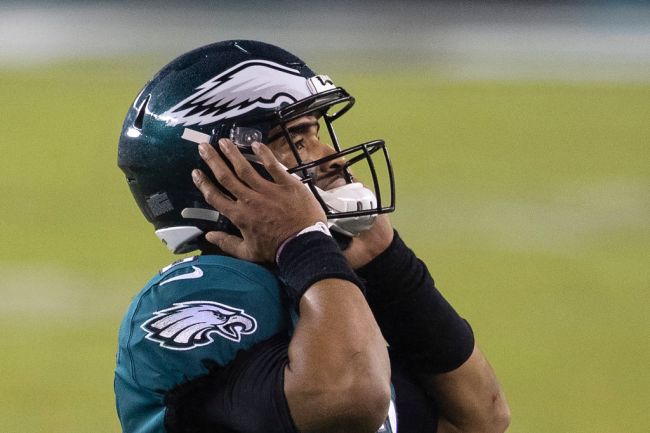 Philadelphia Eagles first-year head coach Nick Sirianni has only been with the organization since January 24, so he has a lot to learn about his players. With that being said, when quarterback Carson Wentz was traded to Indianapolis, the general assumption was that Jalen Hurts was in line as his successor.

The 22-year-old duel-threat was part of a rotation at the position throughout 2020 and took over as the starter at the end of last season. He completed 52% of his passes for 1,061 yards and six touchdowns, adding 354 yards and three scores on the ground. Philadelphia won only four games during the unusual season, but Hurts showed just enough promise to get Eagles fans excited about his potential under center. Not to mention what he did in college.

Jalen Hurts was a walking highlight reel for @OU_football all season long 🔥🤩 pic.twitter.com/CNNHe2BOdJ

Nevertheless, Sirianni and general manager Howie Roseman both refused to commit their future to Hurts ahead of the 2021 NFL Draft. The team recently signed 36-year-old Joe Flacco as the only other quarterback on the roster and the head coach referenced the importance of “competition.”

Roseman, Sirianni on whether move back in draft was endorsement of Jalen Hurts as starter. pic.twitter.com/5KoeB2I3er

Coaches and players have only been back in the facility for two days, so a lot of his response to the question was coach speak, but his indecision leaves the door open.

Philadelphia traded back in this year’s draft, which puts them just outside of the top quarterback range at No. 12. That move felt a lot like a commitment to the former Alabama and Oklahoma starter when it happened. However, this year’s quarterback class is deep and if the right player were to fall, it sounds like Sirianni and Roseman might be willing to pull the trigger.

In addition, the Eagles have been among the small group of teams who continue to monitor a potential trade for Texans quarterback Deshaun Watson. Aaron Wilson of the Houston Chronicle reported earlier this month that Philadelphia is keeping an eye on Watson’s legal situation while continuing to do due diligence on a possible trade.

Having that rumor floating around despite the legal matters, coupled with Wednesday’s comments lets you know that the franchise may not be completely sold on Hurts moving forward. It will be interesting to see what happens next weekend and in the coming months.

How funny would it be if the Eagles started Joe Flacco next fall?