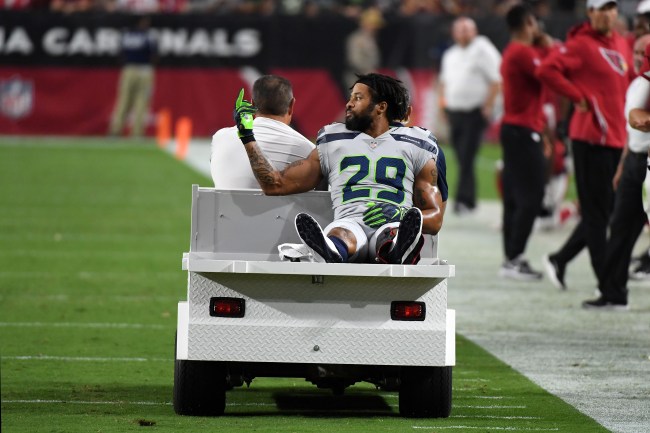 Earl Thomas had a lot of great years with the Seattle Seahawks — where he played in two Super Bowls (winning one), reached six Pro Bowls and solidified himself as a future Hall of Famer. Unfortunately, the safety and the team couldn’t agree on a new contract this offseason, leading to Thomas eventually signing with the Baltimore Ravens last week. And, while Earl Thomas’ days in Seattle were incredible, the lasting image many of us will remember is Thomas giving a big “F you” to the Seahawks’ sideline after injuring his leg during a game against the Arizona Cardinals.

For those who might forget what that looked like, here’s a little refresher of Earl Thomas’ “salute” to Pete Carroll and the fellas on Seattle’s sideline that day.

Earl Thomas letting the Seahawks know what he thinks of that whole undervalued contract thing 😂😁 pic.twitter.com/j6dOD0vLVX

Clearly, Thomas wasn’t a big fan of Seattle’s organization refusing to give him a new contract prior to him breaking his leg in that Week 4 game. The decision didn’t ultimately cost Earl Thomas too big — since he signed a four-year, $55 million deal with the Ravens — but his first choice probably would have been to get paid last year without having to gamble on himself; and then go out and get hurt.

Fast forward to a recent interview with Peter King of NBC Sports, and Thomas finally explains why he decided to give the middle finger to the Seattle Seahawks’ sideline.

“A lot of frustration that day. I was in a battle with the team, and I chose to play, and I was betting on myself. So when it happened, it just added to my frustration. I did what I did, and I saw Pete Carroll, and I just was like, ‘You won. You won.’ Just a very disappointing day.”

Earl Thomas had every right to be upset with how things ended last season and, eventually, overall with the Seahawks. That said, with a new team and 55 million reasons to look forward to what lies ahead, it’s clear the safety isn’t looking back at what happened with his former team.

“The Ravens were never in the picture,” Thomas told me Thursday. “I was shocked. I was blessed.” In the span of two hours and 10 minutes, the Ravens and Thomas’ agents worked out a four-year, $55-million deal. Moral of the story: It only takes one. And it doesn’t take long.

Sure, Thomas would have preferred his big payday coming last season prior to the injury and any uncertainty about his NFL career, but, hey, it seems like he’s actually come out winning in all of this.