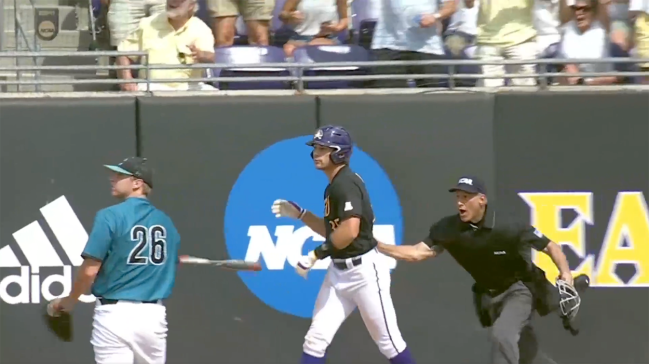 East Carolina baseball is headed to an NCAA Super Regional after putting a beatdown on Coastal Carolina in the final game of the Greenville Regional. The exclamation mark came in the the seventh inning on Monday, but the umpire made it all about himself.

College baseball is fun. They play loud, talk smack, and — most importantly — enjoy themselves.

All weekend, as the two North Carolina programs had a lot of back-and-forth. They were getting all up in each other’s faces.

During the first game of the Regional Final on Sunday afternoon, Chanticleers utilityman Nick Lucky absolutely PIMPED a late-inning home run. It’s something that he has done all season. Coastal went on to win and forced Game 7, but not without ruffling the feathers of their opponents.

In Game 7, it was more of the same. Lucky went yard and pimped it once again.

However, it was all about the Pirates. ECU put up 13 runs en route to winning the Greenville Regional and sent CCU home.

During the seventh inning, Pirates outfielder Bryson Worrell hit a three-run home run to the moon. It was the nail in the coffin.

Not sure if this Bryson Worrell home run has landed yet 😳

As Worrell (very slowly) made his way out of the box, he was about to give the Chants a taste of their own medicine in front of a sold-out home crowd. It may have been one of the most vicious, ice cold pimp jobs of all-time if he was allowed the opportunity, but the umpire made it all about him.

Umpire pushes Worrell to get going. I get it man, but jesus its Game 7 to go to Supers!!!! pic.twitter.com/WEV932Q6SN

While Worrell began to pimp the moonshot, the home plate umpire ran up behind him and pushed him down the first base line.

Super, super lame. THAT is where the umpire chose to draw the line?!

BOOOO! Let the boys play and let them play loud!