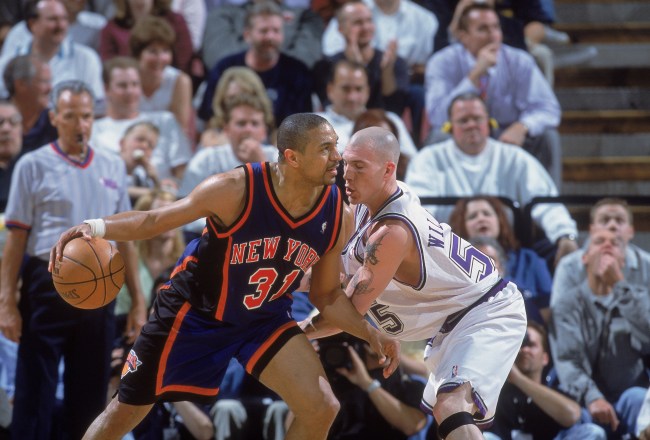 The Menendez brothers, Erik and Joseph, became infamous in the mid-90s for the brutal murders of their wealthy parents. The brothers shot their entertainment executive father, Jose, and their mom, Kitty, with a shotgun in their Beverly Hills mansion in 1989, claiming in trial that the murders stemmed from relentless emotional and sexual abuse. Initially, they were never suspects in the murder, but began raising suspicion when they lavishly spent their parents fortune within weeks of the murder.

A Redditor pointed out that one of their high-priced spends was captured on a Mark Jackson 1990-91 Hoops basketball card, as they are spotted sitting front row at Madison Square Garden during the 1989-90 season, just months after they murdered their unsuspecting parents and months before they were charged.

Reddit is mostly bad but the other day I learned on that website that the Menendez Brothers are in the background of this basketball card and that logistically this would be between when they killed their parents and when they were arrested and I cannot stop thinking about it. pic.twitter.com/fMb5ugLX2m

What’s more is that Darren Rovell reports that eBay has been yanking the item off its site, telling sellers that the cards violate policy because they are “affiliated with a known murderer.”

eBay has started to pull listings of the Mark Jackson-Menendez Brothers cards, telling sellers their items violate policy because they are “affiliated with a known murderer.” pic.twitter.com/ZMzqSgYh1M

But, as the Washington Post points out, a number of the cards still were being offered on Tuesday morning, with one seller offering a lot of 30 for $344.

Sooo, you can’t sell a Mark Jackson card on eBay, but Charles Manson is totally cool. Got it.

Tons of Charles Manson stuff. Weird they chose to pick on the card listing and none of this other crap pic.twitter.com/9YYhHrGrMS